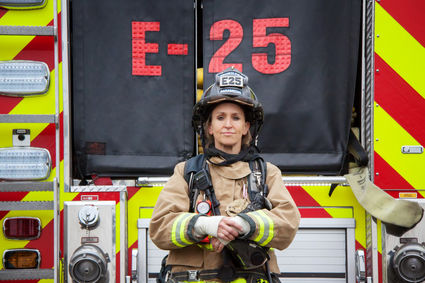 Kelli McNees in full gear in front of one of the fire trucks from the Mukilteo Fire Department. McNees is the departments first female fire captain.

It’s rare for women to be in the fire service, but that didn’t stop Kelli McNees from joining and eventually becoming the first female fire captain for the Mukilteo Fire Department.

McNees started out as a volunteer firefighter in 1997.

While she’s very passionate about her job now, initially, she didn’t think becoming a female firefighter was possible. However, she soon had a change of mentality.

“It wasn’t until someone told me that women can be in fire service that I wanted to join,” said McNees. “I’ve never ran into someone who said I couldn’t do it or can’t do it.”

She was interested in paramedics and began her paramedics training in 2005. She later received a paramedics certificate from Tacoma Community College.

Then, in 2006, she finally entered the Mukilteo Fire Department as a paramedic firefighter.

Although there are dangers that come with being in the fire service, McNees finds a certain type of thrill being a firefighter.

“I’m an adrenaline junky,” McNees said. “I enjoy the part of the job where I’m able to help carry people out to safety, and make sure they make it to the hospital.”

While working at the department, McNees continued her education at Central Washington University, where she earned a bachelor’s degree in paramedics.

For 13 years she was a paramedic firefighter, so when news came out of her promotion, she was very surprised.

“I was pretty shocked to have that much growth within the department,” McNees said.

Nevertheless, she’s excited to take on the new position.

As fire captain, she will be in charge of resource management. She determines who goes where and who does what. At the same time, she relays information to her team, so they can do their jobs safely and efficiently.

“It’s my job to make sure whoever reports to me makes it home every day,” McNees said.

Fire Chief Chris Alexander has no doubts for McNees and her crew.

“The Mukilteo Fire Department is a community-oriented department,” said Alexander. “(McNees) is an embodiment of what the department stands for.”

He continued to emphasize the importance of safety to the department, which are values McNees also shares.

To further prepare for her new position, McNees was invited to attend management classes at the National Fire Academy in Maryland. She will go back for two weeks to take more classes in October.

She reflected on her time as a volunteer firefighter and the growth to where she is now.

“It’s amazing how close the community is here,” McNees said. “I still run into people who I used to volunteer with or trained with. Your group of friends just becomes larger and larger.”

McNees described herself as someone who is always working towards something and hopes to become a battalion chief within the next five years.

Chief Alexander has high hopes for McNees as she takes on the role as one of the two fire captains in the department.

“I hope that she’s a very successful captain and leader of the crew,” Alexander said. “I hope she can be a role model for the department.”