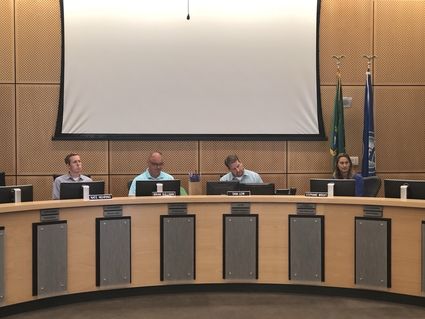 Four of five Snohomish County Councilmembers visited Mukilteo City Hall Monday, June 17, for an administrative session. Under county law, the council must have one meeting in each of the countys districts per calendar year. Mukilteo is in District 2, represented by Brian Sullivan, a former Mukilteo mayor and councilmember.

In 2016, Snohomish County voters approved Prop. 5, which amended the county’s charter, requiring the County Council to conduct an evening meeting in each of the county’s five districts each year.

Mukilteo is a part of District 2, along with Everett and Tulalip, and is represented by Sullivan, who is the longest-tenured County councilmember.

The meeting was brief, lasting just over 30 minutes, with most of it belonging to public comment.

Two of the comments focused on airplane noise from both commercial air service at Paine Field, as well as late night and early morning Boeing Dreamlifter flights. Those same topics continued on as both Sullivan and Low stayed for the City Council’s meeting to talk to Mukilteo’s electeds about various issues.

Low, whose district includes Lake Stevens, Monroe, and Snohomish, among others, told the council that looking back on the history of Mukilteo’s fight against air service, things haven’t been balanced, noting there was “lots of pressure” on the terminal and that different entities and agencies didn’t work together like they should or could have.

“I want us to have balance with the cities and the airport,” he said.

Low also said there are extremes with residents in the area pertaining to both the future of commercial air service at Paine Field, as well as Boeing.

“We hear from constituents ‘no more flights (out of Paine Field)’ and ‘no more Boeing,’ but we need to find that reasonable balance.”

Sullivan has been vocal in his opposition to commercial air service throughout his political career, said during the ’90s, more power over airport jurisdictions went into federal hands rather than those of cities or counties. This, he said, has made it hard to get Boeing and Paine Field to comply with noise agreements.

“I’ve been asking for mitigation agreements for 30 years,” he said. “It’s frustrating. It’s an uphill climb, but it’s not insurmountable.”

Councilmember Scott Whelpley suggested the county look into grants to pay for triple-pane window replacement and improved insulation for those living under the flight path, as they’re the ones bearing the brunt of the impact of commercial flights.

Sullivan said that falls to the electeds in the other Washington, and it depends on if they have money to fund that.

“I would approach our U.S. senators and Congress about that,” Sullivan said. “Our first priority, however, should be our schools. Kids can’t learn if they’re can’t hear because of airplane noise.”

As mentioned, 2019 will be Sullivan’s final year as a Snohomish County Councilmember due to term limit restrictions. Low, who is a first-term Republican, lauded Sullivan for his bipartisanship and leadership.

“You’ve all been well served,” Low said of Sullivan.

“It’s been a pleasure,” Sullivan said of serving Mukilteo during his County Council tenure.