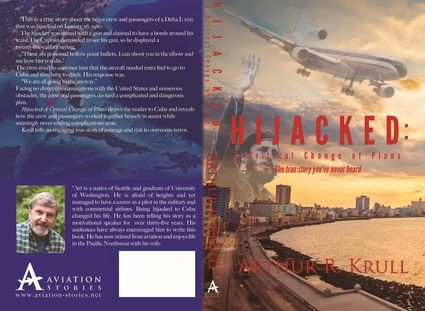 Mukilteo resident Art Krulls book Hijacked  A Critical Change of Plans covers his experience working on a Delta plane that was hijacked in 1980. The book went on sale last week.

Mukilteo resident Art Krull never envisioned himself to be a writer.

He had a story to tell, and he didn’t mind telling it, but writing was never in his plans.

But after telling his story many times to different groups in the area for roughly 35 years, and being told repeatedly “you should write a book,” Krull got to it, and after four years in the works, released the book last week.

Krull’s book “Hijacked  A Critical Change of Plans” tells the true story of Krull’s experience as a pilot of a Delta L 1011 hijacked in January 1980.

“We left Atlanta around 1 or 2 in the morning to go north (on the East Coast),” he said. “It was your typical late night relocating flight, except one of the passengers was a hijacker. He showed us he had a gun, and claimed to have a detonator.”

The hijacked flight then went south instead of north, and landed in Cuba. The crew hoped the hijacker, who Krull referred to as “Ishmael,” would get off the plane, but he demanded the crew refuel and fly him to Iran. As Krull notes in the book, this incident took place roughly two months after students loyal to Iran’s Ayatollah Khomeini took over the U.S. Embassy in Iran.

“Our captain, he asked him to show us his gun to make sure it was a real hijacking,” Kroll said. “And he showed us this pistol and he told us the bullets were poisoned with cyanide. He (the hijacker) told our captain, ‘I can shoot you in the elbow and see how fast you die.’”

The flight landed in Cuba around 5 a.m. that day, and Krull said things were pretty stable, everyone remained in the plane, and discussions continued between the crew, the hijacker, and the Cubans.

The crewmembers kept the hijacker busy in the cockpit area, Krull said, and were able to sneak the passengers off the plane without him realizing.

“He was kept occupied until he got up and saw that everyone was gone,” Krull said.

After Cuban authorities took the hijacker into custody, the passengers got back on board, and to Krull’s surprise, they were all in good spirits.

“They’d been out drinking, and had bought shirts and all that,” he said, laughing. “They’d been having a real good time.”

One of the more memorable moments of the day came when Krull called his wife, Kathy. He told her he was OK and safe, but she had been unaware of the incident until he called.

“That was really scary to learn all about that after the fact,” she said.

Krull said the book is coming out at an interesting time, as Cuba and Iran are in the news a lot, he said.

“It’s kind of a parallel in that way,” Kathy said. “Things happening then are happening today.”

Another interesting aspect of all this was when Krull was returning home, he was in Dallas and picked up a newspaper that covered the incident.

“It was kind of funny because they got some stuff wrong,” he said.

In the time following immediately the incident, Krull had debriefings with the FAA and other high-ranking officials. The time had been so hectic, Krull said, that he realized he hadn’t used a bathroom in more than 36 hours.

When many hear about hijackings in the news, it usually results in deaths or crashes, and those involved don’t get to tell the tale.

“There were so many maybes,” Kathy said. “But thankfully, things worked out.”

As the years went on, Krull hired a private investigator to see what happened to the hijacker, but didn’t learn much.

“We’re not totally sure what happened to him,” he said.

In addition to Kroll’s experience in the incident, the book also shares Kathy’s views of his career and the aftermath of the incident, as well as explains how a rabbi on board helped keep the passengers calm.

“I put his journal entry in the back,” Krull said. “He wrote it in Hebrew, and his granddaughter actually translated it for us.”

The book also highlights Krull’s career in the military and commercial air service.

The book can be purchased at aviation-stories.net.