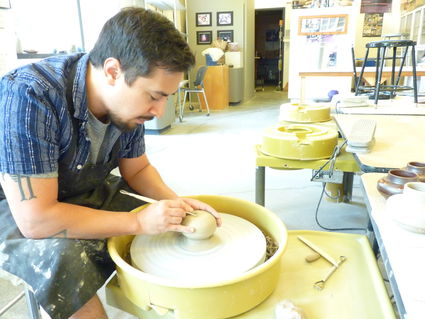 Andre Marmaduke forming clay on a pottery wheel in the art studio at Everett Community College. The studio is located at Whitehorse Hall, where the open house and art sale will also take place.

For Andre Marmaduke, making art was never in his plans.

This year, the art sale, sponsored by the college’s art club Art Alliance, will be taking place during EvCC’s open house at Whitehorse Hall this Thursday from 10 a.m. to 6 p.m.

Many types of work from various artists will be showcased during the sale, including Marmaduke.

Marmaduke is a mechatronics major at EvCC. While he’s not in the art program, he has a great interest in ceramics.

Despite being involved in ceramics now, he never had any intention in going into the art.

“I eventually had to take an art class as an elective to graduate,” said Marmaduke.

“You meet a lot of people who you don’t expect to do ceramics,” Marmaduke said. “People should try it out more.”

However, that’s not the first time he’s been exposed to the art style. Marmaduke’s parents used to do pottery while he was a child.

“Growing up, I used the pottery my dad made for us, so in that way he helped me,” Marmaduke said.

Once he was in the ceramics class, he tried doing making sculptures but found that he was best at making pottery. He prefers making utilitarian pottery rather than anything abstract.

Other than learning how to create pottery, Marmaduke said he’s also learned how to be patient.

He also found ceramics to be meditative, becoming a type of stress relief where he can center himself in his work.

Marmaduke finds that he gains inspiration during the glazing part of the ceramics process.

During this process, various colors can be glazed over the pottery.

He continues to come up with new types of pottery to create after learning what color scheme looks best.

The art sale will be his first time trying to sell his art. So far, he’s made small bowls, vases, and cups.

Alongside feeling excited for people to look at his art, he does feel nervous about creating quality pieces.

“It’s a good way to come support the artists at school,” Marmaduke said. “I don’t want to sell something bad, but there’s some cool imperfections you get that sometimes you want to be able to keep.”

Most of the art costs less than $20, Marmaduke said. 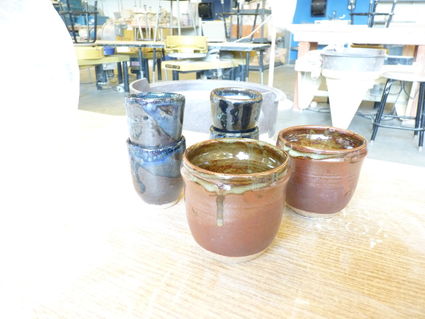 Pottery made by Andre Marmaduke.

James Snitily, the Art Alliance Club advisor, is looking forward to the event.

The art sale at EvCC has been going on since Snitily started working at college, which was about 20 years ago.

“It encourages students to develop their line of work,” said Snitily. “It’s fun for students and helps them learn to market their work and set up their own display.”

The art show will be open to the public. Ten percent of the proceeds will go to the Art Alliance Club.