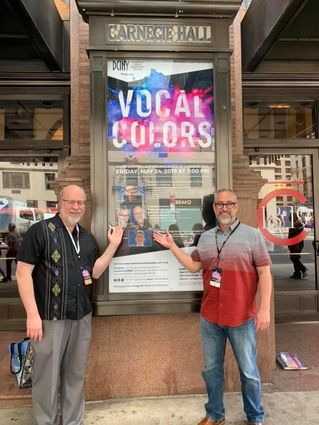 For many in the music world, performing at Carnegie Hall is a dream come true.

For Mukilteo’s John Muehleisen, a longtime composer of music, that dream became reality this past Friday, as the composer’s latest project, “Borders,” which focuses on being welcoming and compassionate to others, was performed at Carnegie Hall as part of the Distinguished Concerts in New York (DCINY) series.

“It was amazing,” the composer, who has lived in Mukilteo since 2012, said. “It was the world premiere of the piece.”

Muehleisen, along with the Great Bend Chorale, a group of adult and youth singers from Mason County, traveled to New York to perform the piece that Muehleisen has been working on for nearly a year.

Muehleisen had worked with Great Bend Chorale’s conductor/artistic director Matthew Melendez on previous projects, and DCINY reached out to Melendez to bring the group to New York to perform. Melendez reached out to Muehleisen, and the two began brainstorming ideas.

“Initially, (Melendez) wanted to do something Mason County-themed,” Muehleisen said. Melendez introduced Muehleisen to a “welcoming song” one of the tribes in the Hood Canal sang to British Naval Officer George Vancouver and his sailors during their Northwest exhibition.

One of the things Muehleisen most likes about the story is that while the two groups didn’t share any common language or dialects, the use of music allowed them to communicate with one another, as the sailors sang back to the natives.

“Music can cross boundaries and borders,” he said.

That same welcoming song the tribe sang, as well as other welcoming songs from Korea, Africa, and Ireland, were part of the first section of the piece.

The discussion between Muehleisen and Melendez about that encounter between the British and the tribe soon became centered on immigration and welcoming.

“We started talking about the early settlers. Did they welcome others?” Muehleisen said. “This wasn’t actually chosen because of the current news topics, but it’s timely.”

The second portion of the piece is “Mothers of Exiles,” and uses excerpts from “The New Colossus,” the poem on the Statue of Liberty, and parts of an Irish mother’s letters to her son in the 1800s during Ireland’s potato famine, asking her son to bring her and his siblings to America.

“(The poem and statue) are the notion of welcoming  liberty and freedom,” Muehleisen said.

As for the Irish mother’s letters, “I wanted to create (a section) of the piece of ‘why.’ Why people emigrate from their homes and immigrate somewhere. It reframes the debate our country is currently having into themes of compassion, and why they’re coming here.”

Also included is a poem called “Refugees” by Brian Bilston, which when read top to bottom says we shouldn’t welcome those into our country or area and lists reasons why. When read bottom to top, it says the opposite.

“It really shows how split we are.”

Bible verses, such as Chapter 25 from the Book of Matthew, are included. That chapter includes, “For I was hungry and you gave me something to eat, I was thirsty and you gave me something to drink, I was a stranger and you invited me in, I needed clothes and you clothed me, I was sick and you looked after me, I was in prison and you came to visit me.”

“Culturally in America, we have deep Christian roots,” Muehleisen said.

This led to Muehleisen looking at the welcoming nature of other cultures and religions, which he found very interesting.

“They all say to do it (welcome one another),” he said. “And it’s not just national or municipal borders, but the borders between each and every one of us ... This is the musical representation of the melting pot.”

While some may take the performance as a political statement, Muehleisen said he just wants to create conversation from those who hear it.

“It’s supposed to transcend politics and speak to our better angels and our core humanity,” he said. “It’s the notion of welcoming as a statement of love and compassion. It’s meant to get people to think and open their hearts.”

The world premiere of “Borders” went off without a hitch, Muehleisen said. The Great Bend Chorale brought 30 adult and youth singers from Washington, while 20 more from New York and New Jersey joined in at the show. There were also accompanying strings, percussion, and piano.

Muehleisen watched the performance from VIP box seats with his wife, and was escorted to the stage to take a bow with the performers to a standing ovation.

“It was a thrill,” Muehleisen said. “It was surreal, and it was very gratifying.”

“I didn’t really have nerves, even though this was kind of a peak thing,” Muehleisen said, laughing. 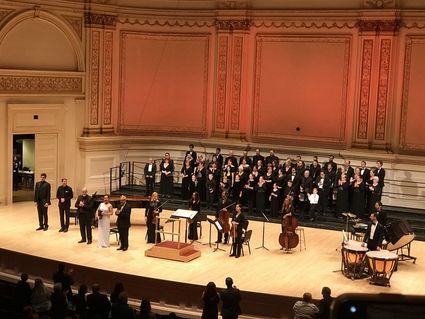 What made the experience all the more gratifying was the welcoming (of course) nature of the performers.

“I didn’t know anyone before going to rehearsals a few weeks ago,” he said, “but they welcomed me and made me and my wife feel welcome. They’re very close-knit, and they welcomed me to their family.”

“Borders” will make its Washington debut this weekend. The first performance will be at St. Edward’s Catholic Church in Shelton (601 W C St., Shelton) at 8 p.m., and Sunday at 4 p.m. at Olympic College’s theater (1600 Chester Ave., Bremerton).