From ‘hype videos’ to hanging with Russell Wilson 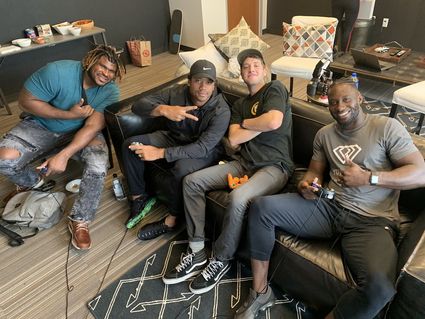 Kamiak grad Josh Cashman, second from the right, with Seahawks players D.J. Fluker, Russell Wilson, and Jaron Brown. Cashman made hype videos that got posted all over Twitter, and inevitably led to him playing Super Smash Bros. with Wilson, Fluker, and Brown Thursday, May 16.

If you’re a fan of the Seattle Seahawks and have a Twitter account, it was hard to miss.

During the second half of Seattle’s 2018 season, when the team caught fire and made the playoffs in a “rebuilding” year, the question on Twitter after the games weren’t about the team’s next opponent, but instead “When is the next Cable Thanos video going to drop?”

Cable Thanos  account username @CableThanos_  was a Twitter user making elaborate “hype” videos, showing some of the best plays from the Seahawks’ most recent games.

Those videos were mixed with movie, music,...