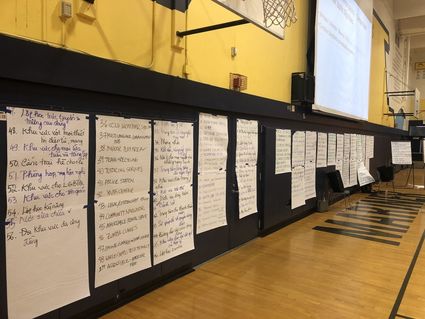 The Mariner Community Campus project meeting on April 13 brought in more than 50 ideas for the project. Those ideas were written in English, Russian, Spanish, and Vietnamese, and posted along the walls of the Mariner High School gym.

The Mariner Sno-Isle Library first opened in February 2017 and has since served more than 100,000 people.

Sno-Isle said it identified an “underserved need” before the opening of the Mariner library, and with the help of Sen. Marko Liias (D-Mukilteo), started the conversation for a community campus project to help better serve the needs of the Mariner community.

During the 2018 Legislative session, Liias secured $322,000 in funding to kick-start the project, which launched last October.

Many local agencies, including the Mukilteo School District, United Way Snohomish County, and Community Transit, are on board to help with the project, which aims to find land in the Mariner area for a community gathering facility with different programs.

On Saturday, April 13, Sno-Isle and the Pomegranate Center, an organization that focuses on helping communities build gathering places, held a public meeting at Mariner High School for community input on the community campus project.

Mukilteo School District School board member Judy Schwab and Snohomish County Councilmember Stephanie Wright were among those in attendance.

“The goal here is to create a community campus for the Mariner neighborhood,” Sno-Isle Libraries’ Executive Director Lois Thompson said. “Today, we want to hear from the community to help shape this project.”

Christine Stansfield, volunteer and community engagement coordinator for Sno-Isle, said after seeing the community gather and use the Mariner Sno-Isle Library, the need for a community gathering place became even more clear.

“It’s more than just a library,” she said.

Stansfield said the Mariner area is expected to have a 20 percent population boom over the next five years, which makes a community campus even more of a need.

“There’s not many services or places to gather in the area,” she said. “It’s a very diverse neighborhood with lots of kids. There’s a lot of enthusiasm for doing something.”

Stansfield also said the project is looking for additional state funding, and should know in the next few weeks if there is any coming from the 2019 Legislature. That funding would assist with purchasing land, as well as the construction and design phases of the project.

The goal is to open the Mariner Community Campus in 2025.

Milenko Matanovi?, the founder of the Pomegranate Center, said there are many directions the project can go.

Overall, the facility will be a “one-stop shop” for a variety of services, resources, and activities, but the campus itself could look a few different ways.

“It could be one large building where all the services are clustered, or a cluster of nearby buildings,” Matanovi? said. “Services could be spread through a neighborhood and a block of buildings.”

Although much of the project is open-ended and will be shaped later, a few things are set in stone.

The facility must be in the Mariner neighborhood, will be between 10,000 and 20,000 square feet, and the initial tenant and owner of the facility will be the Snohomish Health District.

“It also must be safe, accessible, for all ages, and for healthy living  mind, body, and emotions,” Matanovi? said. “It also must have diversity, and celebrate the differences we have, and protect trees and nature.”

A few dozen Mariner residents, as well as representatives from various stakeholder groups, were asked what they would like to see the future campus have.

Some ideas included a computer lab, early childhood education, a community garden and kitchen, a playground, counseling services, and instructional courses and tutors for all ages.

One of the biggest themes was diversity. Those in attendance wanted places to have religious meetings for all denominations, translators, safe spaces, and a multilanguage communications area so non-English speakers could learn about events and resources in the community.

More than 50 pitched ideas were written in four different languages  English, Spanish, Russian, and Vietnamese  and posted on walls in the Mariner High School gym.

“Think of these ideas as the seeds,” Matanovi? said.

There will be a second open house for the project Saturday, May 11 in the Mariner High School gym from 2 to 4:30 p.m. Matanovi? said he hopes to see even more community members at that meeting.

“If you know someone who isn’t here and should be, tell them,” he said. “This will shape their lives, also. The more people you invite and bring, the stronger this project will be.”

Katya Matanovi?, Matanovi?’s daughter and CEO of the Pomegranate Center, noted those who can’t attend still have an opportunity to provide input via an online survey.

“Some of the responses (from the survey) have been incorporated into the project background already,” she said.

For more information on the project, as well as to take the survey, visit marinercommunity.org. The survey is open through May 1.