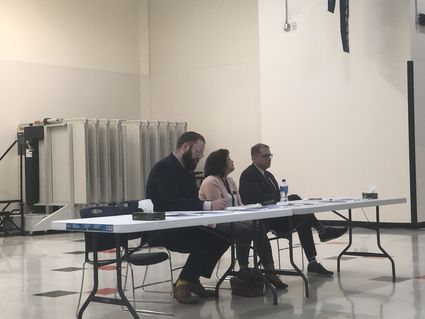 The people had questions, and elected officials had answers at a 21st Legislative District Town Hall Saturday, March 23, at Mariner High School.

All three 21st District officials  Sen. Marko Liias, Rep. Strom Peterson and Rep. Lillian Ortiz-Self  participated in the forum, and the trio of Democrats answered questions and gave updates on current legislation making its way through the state Legislature.

There have been a number of high-profile shootings in the 21st District over the last few years.

There was the 2016 Mukilteo shooting that left three Kamiak grads dead, a shooting at the Edmonds Senior Center where one person died, and a gang-related shooting last fall in the Mariner High School parking lot that led to the evacuation of a Kamiak-Mariner football game.

A member of the Moms Against Violence group noted that 11 bills relating to guns are currently alive in both the state House and Senate, but she was upset that SB 5174, which would require training for those with a concealed pistol license, didn’t make it out of preliminary discussions. She said other states are ahead of Washington in this issue.

Liias said that there were more than 40 bills relating to gun violence at the start of the session, and admitted Washington should already have a law for that in place.

“Other states do have better policies on this,” Liias admitted, “but the (committee) chairs wanted to focus on people in crisis. People who aren’t fit to stand trial still own their firearms. We wanted to focus on he most urgent matters, and take a risk-based approach.”

Liias said he hopes the bill will be reintroduced in the 2020 session so it can be discussed further.

In many recent political campaigns in Snohomish County, one recurring platform has been homelessness and affordability.

One resident noted that in Edmonds, a recent report showed 230 people in the city are homeless. She also said that rising rent costs, lack of affordable housing, and issue like medical issues are the main cause of homelessness, and that not all homeless people are addicts or have mental health issues.

She wanted to know about funding for Washington’s Housing Trust Fund, which requested $200 million, and what the state was doing to protect the rights of tenants.

“If I could, I’d give them $300 million,” Ortiz-Self said. “Homelessness is a problem. Once you hit homelessness, it’s almost impossible to get out of it.”

Liias said the Legislature is looking at “no-cause evictions” as well as reforming tenant rights to give those being evicted more time to move out of their homes.

“Some people are given three days to get out when they’re only a few dollars short on rent,” he said. “We’re talking about reform. Giving them more time to collect that money so they can stay there.”

Peterson admitted that the Housing Trust Fund won’t receive $200 million from the state, but that the Legislature is looking at holistic approaches to homelessness and affordability to prevent those numbers from growing.

A number of people addressed education funding and programs. One person said she used to teach special education, but stopped because there wasn’t enough funding for her to adequately do her job.

A librarian in the Edmonds School District wanted to know more about what’s being done to protect LGBTQ students.

On special education, Liias said the state is doing all it can, but needs more help from the federal level.

“It’s a federal law that we have to provide special education. The federal government gives us almost no money,” he said. “We need to ask Congress to meet special education standards, but since they’re not, it falls on the state.”

Liias said special-education students often require twice the funding than other students, but that a bill passed the Senate to address funding.

Ortiz-Self is a counselor in the Everett School District, and says she hears about transgender students and other LGBTQ students who are constantly bullied..

“We don’t want any student to be picked on, but there’s a disproportion here,” she said.

She said she’s heard “horrendous testimony” from some who believe LGBTQ students don’t deserve protection, and that gets her “fired up.”

“No student should ever feel they’re less than,” Ortiz-Self said. “We’re prepared for the fight  mental health and suicide are the highest they’ve ever been in our state. We have to do better by our students.”

When politics is discussed, you can almost always bank on taxes being discussed.

One woman said residents are being taxed too much, citing gas tax, sales tax, and increasing property tax  hers, she said, went up 41 percent since 2015. She also said the state has received an excess of $4 billion in taxes.

“This is a bipartisan issue,” she said. “Voters have voted against raising taxes. How do we get the Legislature to listen to the people?”

Liias said the $4 billion in excess funds was a surprise, but a good one since the state needed roughly $4 billion to help fully fund education.

He also said transportation taxes such as ST3 were approved by a majority of voters, but property taxes are disproportionate and take too much from lower- and middle-class households.

“We’re looking at turning the tax system upside down  the real estate tax is a flat rate  those high rises in Seattle should be taxed higher than here in Snohomish County,” Liias said.

“Our tax system was written in 1935,” Peterson added. “We need to have a holistic look at the tax system and we need to modernize that system.”