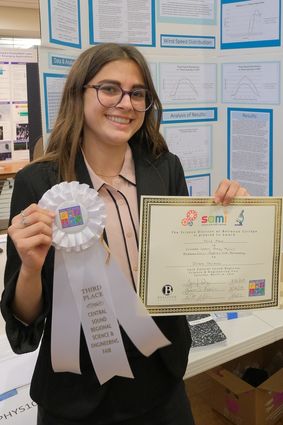 Isabela Ceniceros, a Kamiak sophomore, earned third place in the physics category at the Central Sound Regional Science and Engineering Fair (CSRSEF) at Bellevue College Saturday, March 16. Ceniceros entry also earned Special Awards from The U.S. Metric Association, The American Institute of Aeronautics and Astronautics, and The U.S. Air Force for her research. She was one of only two participants at the competition to earn three separate Special Awards.

The annual Central Sound Regional Science and Engineering Fair (CSRSEF) was held Saturday, March 16, at Bellevue College, and Kamiak was well-represented in a number of categories.

According to the event director and Bellevue College Professor Dr. Jennifer Pang, this year’s event played host to 21 high schools across King and Snohomish counties, competing in 11 separate science, engineering and math disciplines.

This CSRSEF event is considered as a necessary step for students who hope to participate in the Washington State Science Fair being held in Bremerton on March 29 and 30.

CSRSEF this year drew over 400 entrants who worked on projects ranging from Bio-Medical and Transitional Medicine, to Nuclear Engineering, to Robotics, Also on hand were 126 judges from over 40 regional and national companies, universities, government entities, and engineering firms who evaluated the participants projects in categories such as research, engineering viability and application and concept presentation. 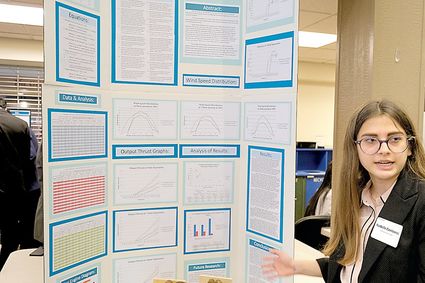 Ceniceros entry also earned three “Special Awards” from The U.S. Metric Association, The American Institute of Aeronautics and Astronautics, and The U.S. Air Force for her research, and was one of only two participants at this year’s CSRSEF to earn three separate “Special Awards.”