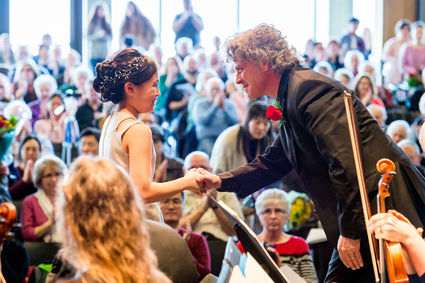 Kaitlyn Gia Lee, one of five youth pianists to perform with the Mukilteo Community Orchestra on Sunday, shaking hands with conductor Trevor Lutzenhiser after her performance.

If the Mukilteo Community Orchestra’s (MCO) most recent concert is any indication of the future of music, we are in good hands.

The MCO held “The Young Artists Concert” at Rosehill Community Center on Sunday, which featured five student pianists who are all winners in the Snohomish County Music Teachers Association’s (SCMTA) Concerto Competition.

The MCO was founded in 1997, and has been performing in Mukilteo ever since, including at tree lightings and Mukilteo Chamber of Commerce events.

In 2011, the MCO performed for opening ceremonies of the new Rosehill Community Center building, and has used the facility for rehearsals and concerts since.

The orchestra has grown from under 10 members initially to over 50, and has expanded to include full strings, wind, brass, and percussion sections.

The MCO plays three concerts per season. Sunday’s concert was the second of their current season.

Prior to the show, MCO conductor and artistic director Trevor Lutzenhiser, who has been in that role since 2007, gave a lecture, previewing the day’s festivities.

Lutzenhiser said it was a “privilege and honor” to be sharing the stage with the five young pianists.

“This is the first year we’ve incorporated (The Young Artists Show) into our traditional calendar,” he said. “It’s an extraordinary opportunity for everyone involved, including the audience. We have some amazing young musicians in this area.”

Sharing the stage with the pianists for an MCO seasonal show wasn’t the only first of the day, as the orchestra performed all of Antonin Dvorak’s Symphony No. 9 in E Minor, which lasted roughly 50 minutes, for the very first time.

“I’ve wanted to conduct this symphony for a long time,” Lutzenhiser said. “This is the first time our orchestra has performed the entire symphony. I can’t think of a better first step for us in really diving into symphonic orchestra than Dvorak’s ninth symphony.”

The young artists performed select pieces from Bach, Mozart, Haydn, and Shostakovich. All the works performed were hand-selected by the young performers.

“I want to make it clear, I didn’t have anything to do with choosing the pieces,” Lutzenhiser said, who added soon after that he was thrilled with the artists’ selections.

Madison Yeon, an eighth-grader, performed a selection from Haydn’s Concerto in D Major. Yeon began playing piano when she was 5, and has won many competitions and awards in the area.

Daniel Chi-en-Hsu is 11 years old, and his mother, Tien-Yin Chen, has been his piano teacher since he was 4. He also performed a selection from Haydn’s Concerto in D Major. Chi-en-Hsu has participated in numerous competitions and festivals in the area.

Vincent Chen, 13, chose a selection from Bach’s Concerto No. 5 in F Minor for his performance. He is an eighth-grader and he has been playing piano since he was 5. Chen won the SCMTA Concerto Competition in 2016, which allowed him to perform with the Mukilteo Community Orchestra as a soloist. 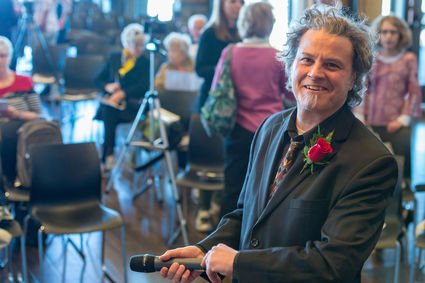 Kaitlyn Gia Lee is a fifth grader who performed Piano Concerto No. 23 by Mozart. A top prize winner of 32 piano competitions over the past three years, she most recently won top prizes at the Russian Chamber Music Competition, gold medals at the Seattle International Piano Competition/Classical Viennese Festival and first-place awards at the Performance Arts Festival of the Eastside (PAFE) for both concerto and solo divisions.

Zeke Taton has played piano for 11 years year and is a homeschooled high school sophomore who said he “enjoys the performance experience.” Some of his musical achievements include placing in the SCMTA Scholarships Competition, being one of the winners of the Convention Recital Competition, and winning a silver medal in the Chamber Music Festival. Taton performed Concerto No. 2 in F Major by Dmitri Shostakovich.

MCO’s next show will be in May, and will be jazz-themed. More information about the orchestra can be found at http://www.mukilteoorchestra.org.