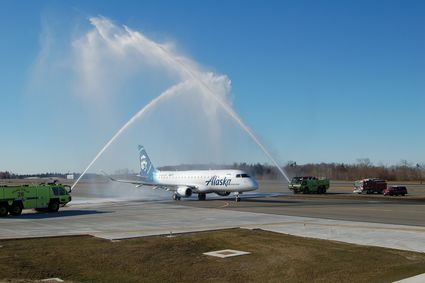 No more assessments, no more delays, no more “what ifs,” and no more wait.

Alaska Airlines kicked off commercial air service with clear skies out of Paine Field on Monday, March 4, with flights to Portland, Las Vegas and Phoenix.

The new terminal will have a maximum of 24 daily arrivals and departures across the Western United States.

Joining Alaska at Paine Field will be United Airlines, which will fly to and from Denver and San Francisco. It will start flights March 31.

Propeller CEO Brett Smith kicked off the festivities by unveiling a statue of Topliff Olin Paine  a former Army Air Corps pilot who Paine Field is named after  with the help of two of Paine’s great-nephews.

Afterward, Smith christened the terminal building by smashing a bottle of champagne on the outside wall. It only took five tries, and resulted in Smith being partially covered by the beverage.

Shortly after, Smith and former Everett Mayor Ray Stephenson cut the ribbon to the terminal building, and the large crowd of elected officials, private partners, media members, and those who were patrons of the first flight to Portland, made it through TSA, Smith and others gave remarks at a news conference between the two terminal gates in the building’s lounge area.

“Clearly we’re lucky. To see the Olympics like this on this particular day, someone is helping us out, and it wasn’t prearranged,” Smith said, before joking that it was thanks to Rep. Rick Larsen pulling some strings.

Alaska Airlines Chief Commercial Officer Andrew Harrison thanked everyone for attending on behalf of his employer.

“It’s been a long time coming  decades, really,” he said. “I was driving in this morning and I saw the Eskimo (Alaska Airlines logo) smiling at me from the tail (of the plane) as I drove into the parking lot. What’s really important here is opening up for the businesses and the communities something really exciting.”

Harrison noted Alaska used to have its headquarters at Paine Field in the 1940s before moving to Seattle, but was excited to be back in Everett. Additionally, Alaska bought eight new airplanes just for service out of Paine Field.

“(That is) a massive investment,” he said, “but we have 100 percent confidence in the community and the needs of the traveling public up here and the businesses, that this is going to be a huge success.”

Larsen, who is the head of the U.S. House of Representatives’ transportation committee and is also chair of the House aviation subcommittee, has been an advocate for the airport for a long time, and spoke about the terminal’s grand opening.

“I’ll be the first to say it: Everett and Snohomish County are ready for takeoff,” Larsen said. “The district here that I get to represent is an important part of the aviation world as new chair of the aviation subcommittee in the U.S. House of Representatives; it’s a really great pleasure to be a part of this.”

“Opening Paine Field for commercial air service continues to build our economy in Everett and Snohomish County; it supports local jobs, and drives tourism for the region,” Larsen said. “The airport is going to improve travel options for passengers in the region and provide much needed relief to traffic congestion.”

In 2015, Somers, along with fellow councilmembers Terry Ryan and Ken Klein, voted to a lease-option agreement that gave Propeller Airports three years to do preliminary design work and environmental studies to obtain necessary permits to build the two-gate terminal. Councilmembers Brian Sullivan, the former mayor of Mukilteo, and Stephanie Wright voted against it in 2015.

“I want to start by thanking Propeller Airports and Brett Smith. They gave provided the most beautiful terminal anywhere, but I have to say Snohomish County provided the beautiful airport and scenery,” Somers said.

Some across the state, and country, have described the new terminal as “Sea-Tac North” or “Seattle’s next airport”  which Somers disagreed with.

“We kind of chafe at that in Snohomish County. I’ve always referred to Seattle as the southern gateway to Snohomish County,” Somers said, “but I can’t do that anymore. We have our own gateway now.”

Gov. Jay Inslee was not at the grand opening, as he was in Iowa, but he sent a member of his office to act as his representative.

Smith said Inslee had toured the facility a number of times, and was a supporter of the project and aviation in the area.

Shortly after the news conference, Harrison and Horizon Air CEO Gary Beck cut the ribbon at the boarding gate for the first flight from Paine Field to Portland. The first flight included Smith, Somers, and Everett Mayor Cassie Franklin.

As the plane moved along to get to the north end of the runway to build up speed for takeoff, Paine Field fire trucks gave a “water salute” as the plane drove between the trucks.

Media members lined up to the side of the runway to capture videos and pictures of the first commercial flight, which departed on time for Portland.

“Our work representing the community of Mukilteo meant that Paine Field is limited to their initial start of service flights,” she said. “They will meet a need in our region. Now, it’s time to return our focus to the important aerospace jobs that benefit from our county airport.”

As reported in The Beacon, there were a multitude of delays in the start of commercial air service over the last year.

First, the Federal Aviation Administration (FAA) decided a new environmental assessment on the impacts of the Paine Field terminal was necessary.

The initial assessment, completed in 2012, accounted for 12 flights rather than the later-planned 24. Additionally, different types of aircraft were planned to be than initially assessed in 2012.

The new draft environmental assessment was released in September, and had no major findings in regards to noise, traffic, or air pollution.

Alaska later announced its first flights for Feb. 11, while United Airlines announced it would start flying out of Paine Field March 31.

While the terminal was waiting for the final thumbs up from the FAA, a partial government shutdown occurred due to President Donald Trump demanding money for a border wall between the U.S. and Mexico.

The shutdown resulted in many FAA employees being furloughed, including those who were working on giving the final government approval, and pushed Alaska’s start date to March 4.

As reported in The Beacon for roughly the last decade, many citizens, community members, and elected officials did not want commercial air service out of Paine Field due mainly to concerns with noise and traffic. 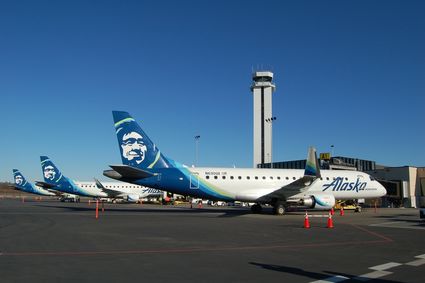 The three aircraft used for the first three commercial air service flights out of the new terminal at Paine Field on Monday, March 4. The first flights went to Portland, Las Vegas and Phoenix.

The city of Mukilteo had legal battles opposing the new terminal in the past, which resulted in the city spending over $600,000 from 2008 to 2018 combating commercial air service out of Paine Field. More than $300,000 of that money was spent on legal appeals starting in 2013.

Those efforts ended when the state Supreme Court declined to review Mukilteo’s appeal of Snohomish County’s March 2015 lease agreement with Propeller Airports prior to completing an environmental review of plans to construct the terminal.

The city’s had roughly $32,000 leftover in its Paine Field reserve fund in 2018 when it was decided the city would no longer be contesting the terminal. That money was transferred into the city’s Transportation Benefit District fund, which helps fund the construction of transportation improvements to preserve city streets and improve pedestrian and bicyclist safety.