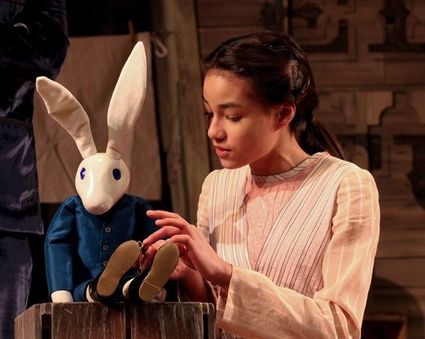 Kaila Estes, a Mukilteo resident, is Abilene in the Seattle Childrens Theatres production of The Miraculous Journey of Edward Tulane.

Mukilteo’s Kaila Estes has been acting since she was 8 years old. Now 13, she has landed arguably her biggest role to date, performing as Abilene in “The Miraculous Journey of Edward Tulane” at the Seattle Children’s Theatre.

Estes goes to Northshore Christian Academy in Everett, where she says public speaking and performing arts are areas of strength.

Estes said she and her siblings were always enthusiastic about auditioning for various roles, and their enthusiasm paid off in the form of lead roles in school productions.

“Thankfully, we were given lead parts in our Christmas programs and middle school productions, which were so encouraging,” she said.

Her voice teacher nudged Estes and her sister toward Village Theatre’s Kidstage program, and when both she and her sister earned roles in “Beauty and the Beast Jr.,” she said she got hooked into the world of musical theater.

“We both got cast, and we literally caught the theater bug. We loved our experience so much and were eager on keep on going, so we kept on auditioning for more and more shows,” Estes said.

Estes got so hooked that “The Miraculous Journey of Edward Tulane” is the 20th production the young performer has been in since 2014.

Estes said acting is fun, as she gets to experience the lives of so many different characters.

“I really like to relate my own life to the part that I currently play,” she said. “I’ve learned that it’s important to not just pretend that you you’re the character, but to become that character onstage. Acting in theater is something very complicated, but I love it because you can never stop improving  you can only grow.”

In her current role, Estes is Abilene, a 10-year-old who was given a china rabbit, Edward Tulane, by her grandmother in the 1930s. She auditioned for the role roughly one year ago, and the show has been for roughly the last month. It closes this Sunday.

“There were a ton of kids who auditioned, then a few got called back. I was so excited because we read that book at school with my third-grade teacher, Mrs. Chambers,” Estes said. “I still did my research about the show, which made me feel way more prepared. By the time callbacks had come along, I had done hours of research and practicing the sides, and it made me feel super ready.”

Estes left callbacks in good spirits, and received the news that she would be Abilene a few weeks later.

“I could not believe that I was cast as Abilene,” she said. “I was so thrilled and grateful to be able to be involved in it.”

Estes is especially thankful for the show’s director, Courtney Sale, for teaching her so much through the whole process.

Estes also raved about Rob Witmer, the show’s musical composer, as well as her fellow actors.

“I have only been in two professional shows with adults, and I have loved it because the adults don’t treat us like we are babies,” Estes said. “We can talk to them, and they treat us like we deserve to be there. They actually like to play and talk to us. That experience is so priceless, and I love being a part of it.”

Estes offered some advice to other young actors, especially to not take it too hard if you don’t get a role, and to be a good listener and to not only focus on your own lines.

Her biggest piece of advice? Make a track sheet.

“I learned that doing this will help so much! It helped me to enter on time, exit on time, do all of my costume changes, remember all of my props, and to keep track of where I am in the show,” she said. “After a little bit, I soon memorize my track sheet and it makes my life so much easier.”

The performance follows the story of a toy china rabbit, Edward Tulane, who experiences love and loss on a 20-year journey. He is given to a 10-year-old named Abilene, who treats him well, but he falls overboard and is lost at sea.

After spending nearly 300 days on the ocean floor, Edward is rescued by a fisherman who takes him home. Edward passes from hand to hand and moves from place to place, and becomes less selfish along the way.