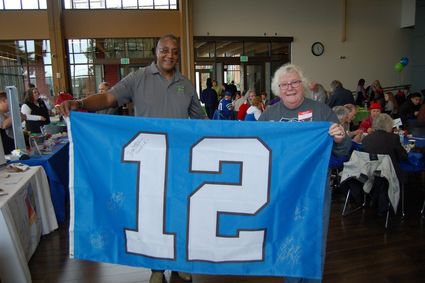 The “12s” were out in full force, and even though it wasn’t “Blue Friday,” the big Point Elliot Room was full of Seahawks jerseys and shirts.

The occasion? The kickoff even for 12 Days of Goodness, a 12-day, 12-city celebration for local seniors to celebrate the holiday season with fellow Seattle Seahawks fans as well as past Seahawks players. There were also multiple companies tailored towards senior living.

Pinnacle Senior Placements and the Mukilteo Senior Association were the event’s prime sponsors, and Ivar’s catered the event.

This is the sixth year of 12 Days of Goodness, and the fifth year the Seahawks have been involved.

Despite her Edmonds mailing address, Newman says she is a Mukilteo resident.

“It takes me five minutes to drive into Mukilteo and 20-plus to get into Edmonds,” she said, laughing. “I live in Mukilteo.”

Newman, a lifelong Seahawk fan, started 12 Days of Goodness to help seniors in the area connect with others during the holiday season. She said the idea took shape due to her experience of taking care of her mother during the last six years of her life, as well as a lifetime of enjoying Seahawk games with her father.

“When I was taking care of my mom, I saw the same people sitting alone day after day,” she said. “Numerous studies show that nearly 60 percent of seniors are without regular visitors. Seniors have been forgotten.”

Newman said that is especially true during the holiday season, when most people are accustomed to spending that time with family.

“I have no problem getting vendors to show up,” Newman said. “They want to be in on the enthusiasm.”

“I thought I could tap into the enthusiasm of the ‘12s’ to make a difference,” Newman said. “One of the biggest unifiers in the holiday season is football. People of all ages sit down together and watch the games. I felt like that was an area where everyone could come together.”

Newman felt that despite having such a die-hard fan base of senior citizens, the Seahawks organization wasn’t doing much community outreach.

“I wrote to them with all these statistics and they hopped right on board,” she said.

“The ex-players love it,” Newman said. “Fred Anderson, who most people wouldn’t recognize walking down the street, they just go crazy for him.” 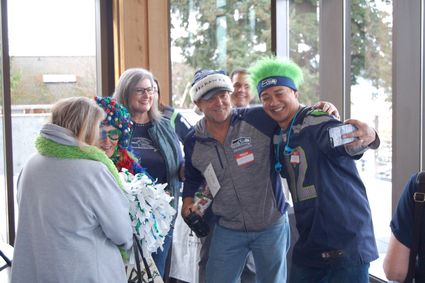 “Mama Blue is just amazing. She’s a character-and-a-half,” Newman said. “She and I talk all the time, and she’s just a riot-and-a-half.”

Newman said she was happy to have Mukilteo as one of the 12 cities on their tour, especially as the kickoff city, as she has some very strong feelings regarding seniors in town.

“I’ve always felt like seniors in Mukilteo got the raw end of the deal with the new community center,” she said. “I always wanted to do something for the seniors in my hometown.”

For more information on Answers for Elders or 12 Days of Goodness, visit AnswersForElders.com and 12daysofgoodness.com.