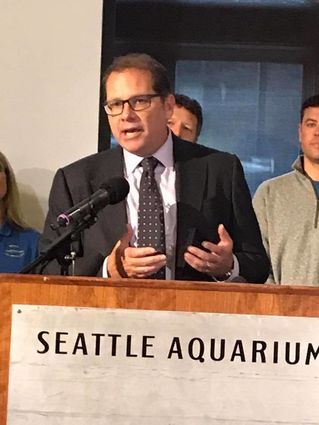 State Rep. Strom Peterson (D-Mukilteo), who led a successful effort to ban most plastic bags from retail stores in Edmonds nine years ago, now has a larger goal in mind: to ban them statewide.

Last week, Peterson and Sen. Kevin Ranker (D-Orcas Island) announced they are introducing companion bills in January 2019 at the state Legislature to address plastic pollution and recycling contamination due to plastic bags.

The reusable bag legislation will build off the existing 23 local ordinances already in place in Washington, which includes Mukilteo and Shoreline. California is currently the only state in the nation to have a ban.

"I am incredibly proud that when I was on the City Council, Edmonds was the first city in Washington to ban these single-use plastic bags,” said Peterson, who will be beginning his third term in January. “Now, nearly two dozen other municipalities have joined in. The time is right to enact this statewide to reduce single-use plastic pollution that does incredible harm to our environment, while streamlining the regulation across the state making it easier for retailers.

“That's why this legislation is supported by the Northwest Grocers Association as well as many environmental groups. With passage of this bill, Washington will continue to lead the country on smart, effective environmental policy."

“Right now, there are more than 86 million metric tons of plastic in our oceans, and the equivalent of five grocery bags of plastic trash for every foot of coastline spills into the oceans annually,” Ranker said. “We must lead with bold, progressive action to stop plastic waste from ending up in our oceans.”

In 2009, Peterson and other members of the Edmonds City Council voted 5-1 to make all retail establishments within the city provide only reusable bags or recyclable paper bags.

“The problem of plastic bags has only gotten worse since then,” Peterson said. “They are causing a major contamination problem in our recycling and compost streams.”

Ranker and Peterson were joined by Kent Councilwoman Brenda Fincher at the kickoff event at the Seattle Aquarium. The Kent Public Works Committee plans to consider a bag ordinance in December.

“We are seeing plastic litter along the highways and in our public spaces. We need to reduce bags so that they don’t end up contributing to the litter going into our creeks and lakes,” said Fincher. “Numerous countries have banned plastic bags and so we are behind the curve.”

Sara Osborne, public affairs director for Safeway and Albertsons, said that customers support reducing plastic bags. “In our bag-ban jurisdictions, customers adapted quickly to using their own bags, and understand the reasoning to do so.”

On Aug. 23, Kroger  the second largest grocery retailer in the U.S. after Walmart  announced that it would phase out plastic carry-home bags by 2025. Subsidiaries QFC and Fred Meyer are phasing them out in 2019.

“As we announced in August, we are still planning to eliminate single-use plastic bags from all of our stores by the end of 2019 as part of our Zero Hunger, Zero Waste mission,” QFC spokesman Zach Stratton said.

“We support the legislative statewide bill, as we believe that single-use plastic bags have zero place in our vision for a world with zero waste, but we are also continuing to move forward with our original business plan in the meantime.”

In August, Stratton said QFC also plans to find a more sustainable solution for single-use bags used for produce and meat and seafood.

“We recognize that we also have opportunities to reduce other types of plastics in our business and in stores,” Stratton said in August. “The current scope includes plastic grocery bags at the front end; however, we also intend to find a more sustainable solution for single-use bags used for produce and meat and seafood.”

Heather Trim, executive director of Zero Waste Washington, noted that the average American uses about 500 bags per year. “Reducing carryout plastic bags will make a big difference. The time for action is now.”

The statewide ban would require a 10-cent charge on all paper carryout bags, to encourage shoppers to bring their own reusable carryout bags. In addition, the bill would require the use of recycled content bags and requires that compostable bags be green- or brown-tinted to reduce confusion by consumers.

The reusable bag bill is one of four bills selected as environmental priorities for the 2019 legislative session, which begins Jan. 14. The other three bills are those that address orca recovery, oil spills and promoting 100 percent renewable energy.