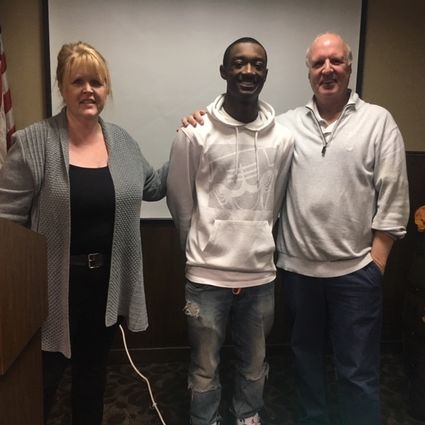 ACES student Devonte Donaldson was the South Everett-Mukilteo Rotary Clubs Student of the Month for November.

The South Everett-Mukilteo Rotary Club has named their Students of the Month for September, October, November, and December.

Lopez is involved in many activities and clubs including Link Crew, ASB Ambassador, Leadership, soccer and more. Logging over 450 hours of community service Lopez was a leader in providing Cascade HS with free feminine hygiene products. After high school Lopez would like to attend WSU or University of Rochester with hopes to become a Biotech Engineer.

Villanueva enjoys the smaller class sizes at ACES and feels the teachers are really helpful. Outside of school Villanueva works and helps care for her younger brother. She enjoys kids and volunteers to watch them. After high school Villanueva plans to attend Everett Commumity College or UW Bothell and study to become an elementary school teacher.

Cantini is an outstanding student and wrestling captain holding state titles. She is described as a young lady that can shift the weather in a classroom and change the climate of an entire community.

Ochoa is described as religious, passionate and industrious. She is involved in school clubs, sports and other activities, church and community. Ochoa translates weekly sermons from Spanish to English and teach a youth class. An excellent student with 4.0 GPA, after graduation Ochoa plans to take the summer off then head to Stanford University to major in Architectural Design.

Donaldson’s favorite class is American Government and was excited to be able to vote in the most recent election. ACES has been a good fit for Donaldson achieving a 4.0 in his first quarter. He has been described as gritty, humble and understanding. After high school Donaldson plans on attending college and would like to be a professional football player or entertainer.

Clover enjoys ACES smaller environment and has earned a 4.0 in her first quarter. She loves to read, especially Harry Potter series and going to drag races.

After high school Clover plans on attending a four-year college and would like to become a veterinarian.