Kamiak started and finished with a flourish at 4A state swimming and diving championships.

The Knights left with a fistful of medals and school records Saturday, Nov. 10, at the King County Aquatic Center in Federal Way.

Junior Elli Straume finished second in the 200-yard freestyle and third in the 500 freestyle, setting two school records in the process.

Her time of 1 minute, 49.24 seconds earned her All-American consideration and was the sixth fastest time in 4A state history.

“I was kind of surprised,” Straume said. “I was happy I dropped a second from prelims.”

The Kamiak junior standout clocked in at 1:51.73 and placed third in Friday’s preliminary heat.

“I knew it was going to be really close,” Straume said of the race. “I just approached it like it was a sprint. So I just sprinted the whole way.”

Straume and teammates Ava Collinge, Song-Nhi Vo and Grace Hatscher finished second in the 200 freestyle relay with a school record time of 1:37.58. Newport won the race in 1:34.96.

“I was really happy with my 200 freestyle and the 500 freestyle,” Straume said. “The relays were really good, too.”

Collinge finished third in the 100 butterfly in a school record and All-American consideration time of 55.33. North Central’s Gabrielle Dang won in 52.58. Collinge advanced to the 100 butterfly consolation finals last season.

“It was a pretty good day. They did a really nice job,” Erickson said. “Those were nice swims.”

Kamiak’s 400 freestyle relay team of Collinge, Vo, Ryu and Hatscher took 10th and was second in the consolation finals in 3:40.48. All four Knights recorded faster times in the finals to help the relay drop nearly three seconds from the prelim time.

“That was a heck of a swim,” Erickson said. 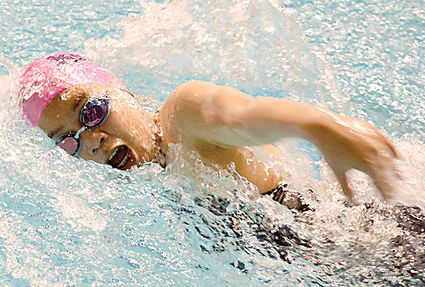 Vo, the lone Kamiak senior, finished 11th in the 50 freestyle.

In their state meet debuts, Ryu placed 16th in the 100 breaststroke and sophomore Connie Chen advanced to the diving finals where she finished 16th.

“The important thing was to get them here,” Erickson said of the two underclassmen.