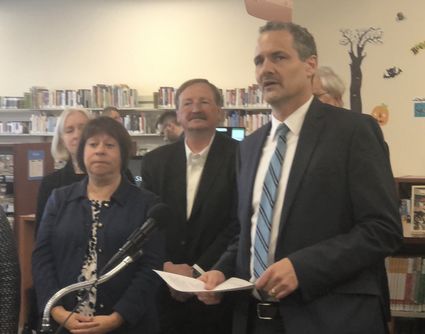 Mariner High School principal Nate DuChesne spoke at the launch of the Mariner Community Campus Project. DuChesne said the library and this project are extremely important for getting community members access to necessary resources.

1: Mariner Community Campus partners pose with the check from the Washington state legislature. Sen. Marko Liias, D-Mukilteo, had the idea for the Community Campus after visiting the Sno-Isle Mariner Library, and secured the $322,000 in state funds.

Local community leaders gathered at the Sno-Isle Mariner Library on Monday, Oct. 29, for the launch of the Mariner Community Campus project.

The Mariner Community Campus project was created by state Sen. Marko Liias, D-Mukilteo, after he visited the Mariner Library and said he saw how important it was to the community.

Liias has been the state Senator for the 21st Legislative District since 2014 and is up for re-election Nov. 6. His opponent is Republican Mario Lotmore, a Mukilteo resident.

Liias told the partners that he wants to create a permanent public-private partnership that would build a safe and accessible community campus, provide a community benefit that meets the needs of all residents, and support the Mariner area through services and amenities that reinforce a strong community and healthy families.

To get the project off the ground, Liias allotted $322,000 in state funds from the state’s capital budget during the 2018 state legislative session.

Sno-Isle Libraries Executive Director Jonalyn Woolf-Ivory said she is proud of the Mariner Library and what it means to the Mariner community.

“This one really has a special spot in my heart,” she said. “The community has really greeted the library here with open arms.”, and since our doors opened just about two years ago, over 100,000 visits have happened within this building.”

Woolf-Ivory said she’s excited to see the beginning of the project begin with the funding from Liias and the state legislature.

“Today, we’re here to launch a new set of conversations around the needs of our residents, and create a new community vision that requires local community members to work closely with local organizations. I believe these conversations will lead to a clear understanding of the services and infrastructure that is essential for the Mariner community.”

Liias said he was proud to be part of the project, especially as he is a graduate of the Mukilteo School District.

“I have loved this community and lived in this community my whole life, and as it’s changed and grown and developed,” Liias said, “I think we’ve all seen that there really is a vibrant community here, but one that lacks the community assets and resources that bring people together and create safe and healthy communities, particularly for our young people who are growing up.”

Liias said he’s had a desire to increase resources in the Mariner area for a long time, and the Mariner Library was the perfect opportunity to make that a reality.

“When I saw the library here, I thought this could be the perfect nucleus for a beautiful community institution that we could build around,” he said.

“We have a lot of students that come here. We have a lot of after school programs at Mariner, but this is a great resource for them as well, so we really appreciate this,” he said.

DuChesne spoke on the difficulties of being located in unincorporated Snohomish County in regards to access to resources for his students.

“It makes it challenging to create that community feel,” he said. “Mariner High School has been somewhat of a hub for the community, but having an extension of this program, the Mariner Community Project, is exciting news for us.”

DuChesene said he spoke for both Mariner and the Mukilteo School District as a whole in saying they’re eager to see the project unfold.

“We’re excited to partner in this and we want to do whatever we can to make this a reality,” he said.

For more information on the project, visit marinercommunity.org.