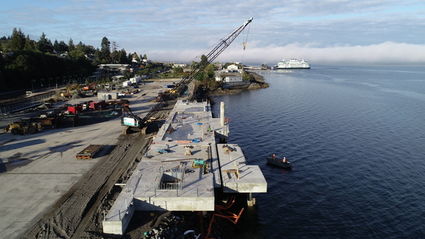 The new Mukilteo Multimodal Terminal Project reached a key milestone recently, as crews wrapped up work on the concrete foundation for the future passenger building.

The new terminal is getting closer to completion, and this was a large step forward, especially with delays in other facets of the project.

Work on the foundation began last September, and contains 7 million pounds of concrete. The foundation will support the new terminal building, as well as the vehicle loading ramp and the pedestrian loading facilities that hang overhead.

Construction crews reached other milestones in the last few weeks as well, as they finished installing the final 487-foot-long underground bore, or hole, needed to install pipes for stormwater utility lines.

According to a project update from Washington State Ferries (WSF), the 487-foot bore was by far the longest one of the project, and it represents roughly 75 percent of the total 650 feet of pipe.

Now that all stormwater lines are in the ground, crews have shifted their focus to installing manhole access to the stormwater system. WSF says this utility work sets the stage for the next construction activities to begin in early 2019.

At a Mukilteo City Council Worksession on Monday, Oct. 8, Nicole McIntosh, Multimodal Terminal Project Manager, and John Vezina, Government Relations Director, gave an update on that next key aspect of the project, the construction of the terminal building and the amenities along the waterfront, which have been delayed multiple times.

That portion of the project went to bid earlier in the summer, and in August, WSF notified the five contractors who bid on the project that their bids had been denied due to budgetary reasons.

As previously reported in The Beacon, the closest bid at the time came in roughly $8 million over WSF’s budget, and the next closest was $18 million over. WSF has said a large reason for the gap was an increased cost of steel, due to tariffs.

At Monday’s meeting, which included all members of the Mukilteo City Council, Mayor Jennifer Gregerson, and between 15 and 20 Mukilteo residents, Vezina and McIntosh told the city they plan to open contractor bids at the end of November, with construction on the terminal building and other portions of the project likely starting in February. Vezina said the new terminal is likely to open fall of 2020.

At a previous meeting in September, McIntosh, Vezina, and Charlie Torres, the project’s manager, gave an update on the project, and received feedback from members of the council and Mayor Gregerson.

During that meeting the trio from WSF said they had found more money internally to assist with the project moving forward, and that they had talked to contractors about how to better repackage the project for when they went out to bid in the future.

McIntosh said at Monday’s meeting they “received a lot of good feedback from contractors,” and one way to reduce cost is to package the next aspect of the project as two separate bids, with the terminal building and marine-related project components falling under separate contracts.

“Some of the smaller companies said they couldn’t afford to do both,” Vezina said.

At the last WSF update, Council President Steve Schmalz wanted a list of changes being made to the project, to make sure it didn’t change too drastically from the city’s vision of the new terminal.

WSF provided a copy of those items, which, for the most part, didn’t affect the visual aspects of the project, with changes coming in electrical systems and piping.

Some key visual changes that were discussed previously but were noted on the list included the flooring of the terminal building being concrete (similar to at Rosehill) rather than the initial terrazzo flooring, and the black fencing that some councilmembers had initially taken issue with.

One new change was to the promenade, where the concrete was altered. Initially, it was going to have a swirl look to it with exposed aggregate, but due to cost savings (roughly $200,000), there will be a more traditional-looking finish for the promenade.

Vezina said the initial design would have been difficult to do, and would cost more in maintenance down the line.

The fencing issue was again raised, with public safety being a top concern.

Multiple councilmembers voiced concerns with the fencing on the waterfront side of the terminal’s exit lanes, saying in case of an emergency, people would potentially be boxed in.

Schmalz said he has been talking to a lot of residents who live in Old Town who have voiced their concern over traffic, and wanted to see if WSF and/or WSDOT would help fund a gate at the new 1st Street connection at the Mt. Baker Crossing to restrict people from leaving the terminal and driving through residential neighborhoods in Old Town. Some residents feel traffic in those neighborhoods will increase unsafely as vehicles dropping people off at the terminal will try to sneak through Old Town to 5th Street rather than driving back through the terminal and getting onto the Mukilteo Speedway like they’re supposed to.

Vezina said WSF understands the city’s view that a fence potentially could prevent unwanted traffic in Old Town, but that building and funding a fence there would likely be something the city would have to do on its own.

“We wouldn’t need the gate if there was no new terminal,” Schmalz countered. “WSF should help chip in for that.”

Schmalz also wanted to work with WSF and WSDOT to prevent passengers heading south on SR-525 from turning left onto 2nd or 3rd Street rather than turning left at the light at 5th Street, suggesting potentially making that illegal at certain times of the day.

Vezina said WSDOT would be open to discussing that further with the city.

WSF has recently been holding open houses for their Long Range Plan in 11 cities in the area. Mukilteo was not one of them, and some councilmembers felt that was a problem, seeing as how this is one of the largest projects WSF has ever done. They said some citizens feel Mukilteo is being looked over by WSF. 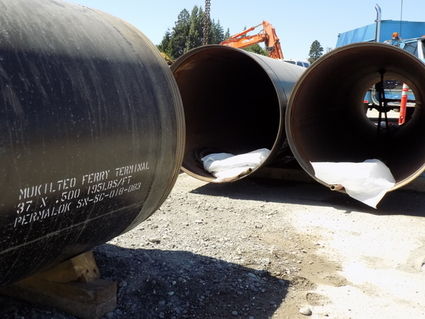 “They take a lot to set up,” Vezina said. “We have an online open house that has all the same materials. There’s also still a public comment period.”

McIntosh also assured the mayor and councilmembers that WSF will be around after construction is finished to help if they don’t get it right the first time.

“When it’s built and open, we’re not leaving. We’ll be a part of this community,” she said. “If there’s something we miss, or didn’t get right, we’ll be here to help the city.”

The council will vote on a mitigation agreement for the terminal at 7 p.m. at next Monday’s meeting Mukilteo City Hall.