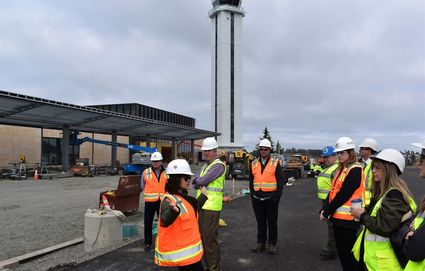 A new draft environmental assessment study for the airport terminal at Paine Field was released this past Saturday, and it appears everything is in order for commercial flights to start next year.

The study, released by the Federal Aviation Administration (FAA) on Sept. 29, showed no major issues need to be addressed, and the 30,000-square-foot terminal should open for flights in early 2019. The terminal had initially been slated to open this fall.

The new study was necessary due to an increase in the projected number of daily flights from Paine Field.

The last environmental assessment, done in 2012, examined the impacts of a maximum of 12 flights per day. There are now three airlines, Alaska, United, and Southwest, that will combine for 24 daily flights (19.5 daytime and 4.5 nighttime). Daytime is considered 7 a.m. to 9:59 p.m. and nighttime is considered 10 p.m. to 6:59 a.m.

Additionally, the aircraft assessed in the 2012 study were different than those the three airlines currently plan to use.

United Airlines, also partnering with SkyWest Airlines (operating as United Express) is planning a maximum of six flights daily, the study showed (4.5 daytime and 1.5 nighttime). They also will be using the Embraer 175s and will fly to Denver and San Francisco.

Southwest Airlines will fly a maximum of five times per day, with four in the daytime and one at night. They will be flying to Oakland and Las Vegas, and will be using Boeing 737-700s, which seat 143.

Alaska and United plan to substitute one and two flights, respectively, from the 76-seat Embraer 175s to Boeing 737-800s. Alaska’s flights would seat 159 and United’s would seat 166.

One concern with Paine Field adding passenger flights was the impact of noise.

But the study found that the increase in flights from 12 to 24 would cause minor noise impacts.

“The minor noise impacts associated with the Proposed Action, when considered in addition to noise impacts of the cumulative projects, may have a minor increase in the overall ambient noise environment, but is not expected to lead to significant cumulative noise impacts,” the study said.

In addition to noise, the new assessment also showed no significant impacts with air quality, health and safety risks for children in the area, surface water, and wetlands.

Another area of concern for citizens near Paine Field has been potential traffic impacts.

The study said travel isn’t likely to be affected on major roadways.

“The Proposed Action would not cause any Snohomish County arterials or any WSDOT, City of Mukilteo, or City of Everett intersections to change from an acceptable to a deficient level of service,” the study said. “All of the Snohomish County arterials analyzed are anticipated to operate at acceptable levels of service with implementation of the Proposed Action for both 2019 and 2024.”

The assessment did say, however, that some intersections will be negatively affected by the increase in traffic, but that that would have happened regardless of whether the terminal was built or not.

Those intersections include SR-525 at Beverly Park Road and SR-525 at Goat Trail Road.

There are still a few things the FAA is requiring, including completing operating agreements with the various airlines, and an amendment to Paine Field’s operating certificate to allow commercial airline service, but the study found nothing major that would affect the completion of the terminal.

Citizens also can mail comments to Environmental Science Associates, the company that prepared the report for the FAA. The public comment period is open now through Nov. 2.

After the conclusion of the public comment period, the FAA will issue a written decision, which could ratify the new study’s findings. They also may issue a decision that the project requires even more examination.

Many Mukilteo residents have opposed the new terminal, and the city spent a lot of time in the courtroom fighting the terminal’s construction.

The city is no longer spending money opposing the terminal, but Mayor Jennifer Gregerson hopes citizens will stay involved with the project now that the new environmental assessment has come out.

“I encourage our community to participate in submitting comments,” Gregerson said. “The city will be reviewing the document, and will likely also provide our input on the FAA's conclusions.”

Those wishing to view a physical copy of the draft environmental assessment can do so at Paine Field’s administrative office as well as the Mukilteo Library. It is also available to view at the public libraries in Everett and Lynnwood, and online at http://www.painefield.com/219/2018-Air-Service-Environmental-Assessment.