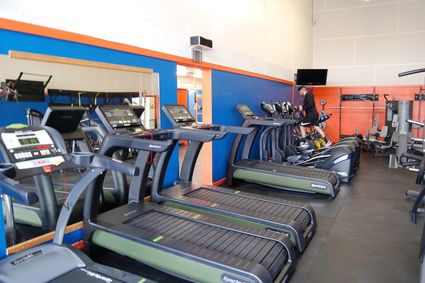 For 2007 Kamiak High School graduate David Matthews, it was all about getting his chance and rolling with it.

Now he owns his own business, Quality Fitness, with his wife, Tia, in a brand-new location, and everything seems to be coming together for the Mukilteo native.

After majoring in fitness and wellness management and minoring in business at Campbell University in North Carolina, where he was a two-sport athlete in football and track, Matthews eventually made his way back to Mukilteo, where he coached football at Kamiak, and began working as a trainer at Quality Fitness, then located in the Sterling Business Park.

“I love the training aspect of it all. That’s probably my favorite part,” he said.

Matthews, who said he had a very athletic upbringing, knew early on what he wanted to do with his life.

“I knew in high school that I wanted to be involved in fitness,” he said. “I was always training for something.”

He was a trainer in Seattle before landing at Quality Fitness in 2014, and ended up purchasing the business soon after.

“The owner wanted to faze out, and I took over,” he said. “I had always thought about owning my own gym, but it happened a lot sooner than I initially expected.”

Everything was going great for Matthews, but he said they weren’t getting as many members as he’d like, due in large part to location.

After talking to a client about the need for a new location, Matthews drove past a building on the Mukilteo Speedway, and realized it had been abandoned for quite some time.

After doing some research, Matthews learned the client he’d been discussing locations with earlier that day, former RAM Technologies owner Bob Glover, was also the owner of that abandoned building.

“Everything just lined up,” Matthews said. “I could see it (the layout of his future gym) in my head.”

Soon enough, Matthews and his wife were the new tenants at 4201 Russell Road, and he had a location with much greater visibility than he had at Sterling Business Park.

“We had so many people help us out with the move,” Matthews said. “I know there were a lot of weeks where my wife and I were putting in 100-hour workweeks between getting this place ready and working at the old building. It took about three or four months to fully build out.”

Now, the business is in full-swing with a lot more space for both an open gym and for classes.

Additionally, there’s something for all ages at Quality Fitness.

“We offer something for everyone. It doesn’t matter if you’re 6 or 96,” he said. “We cater to everyone  that’s the whole point. Everyone should be able to work out.

Another unique aspect of Matthews’ gym is the row of treadmills and elliptical machines.

Designed by SportsArt Fitness, another Mukilteo business whose U.S. corporate office is in the Sterling Business Park, the equipment generates energy, which goes right into helping Quality Fitness’ power grid.

“I found out about their Eco-Powr line, and how they produce electricity and energy,” Matthews said. “I think we’re the first gym in the Northwest to go all out with this.”

“People are always tracking things like calories burnt or steps taken, but with these, you’re counting watts to see how much energy you’re producing,” Matthews said. “This is way different than what’s currently out there at most other gyms.”

Currently, anywhere from 5 to 10 percent of the gym’s power is generated through the SportsArt treadmills and stationary bikes, but that number can easily change.

“As I get more people in here, that number will grow,” he said.

Matthews believes his business is helping lead the way into an energy-based revolution in terms of fitness.

“We want to be on the forefront of sustainable exercise,” he said. “This is a trend, not a fad. This is all cutting edge. SportsArt is helping bring back the energy era, and I’m glad to be a part of it.”

Ruben Mejia, a Chief Technology Officer for SportsArt, affirmed Matthews’ claims about being at the forefront of eco-friendly exercise equipment.

“We’ve been told our nearest competitor puts back about 30 percent energy produced,” he said. “Our machines are putting back 74 percent. It’s much more efficient.”

Mejia said their company has had a lot of success with their Eco-Powr machines, which also include exercise bikes, cross trainers, and more, and that they have been winning awards around the world.

Their equipment was chosen as the exercise equipment for the Sustainable City project in Dubai, and they’re getting more popular all the time.

“It’s hard to get into the larger gyms since we’re often not on their preferred vendors list,” he said. “We recently got approved by The Hilton and are allowed to sell to them, and we’re working on some other things as well.”

A lot of smaller gyms, like Matthews’ Quality Fitness, are clients.

“A lot of gyms are looking for differentiators. Small gyms especially,” Mejia said. “We’re actually seeing people pay more for memberships at some places because of this equipment.”

Already, Matthews said business is about where it was in January, which is peak season for most gyms, and credits a lot more “foot traffic” with being on the Mukilteo Speedway as a big assist.

For now, Matthews is getting into the swing of things in the new location, with a grand reopening having taken place on Sept. 12. But with the transition behind him, Matthews and his wife have even more to look forward to than keeping the new location up and running.

Just recently, Matthews found out he was going to be a father for the first time.

“When Tia told me, I wasn’t sure how to react, because she’d told me she was pregnant on April Fools’ Day earlier this year,” he said, laughing. “But I’m super excited. We’re both praying to God for a healthy child.”

Luckily for Matthews, the new location has a child care room, which Tia operates when she’s not at her paraeducator job at Columbia Elementary.

“It’s going to be awesome having the kid here with me at work,” Matthews said. “And having the child care room, it’s perfect timing with our child on the way.”

Matthews said he feels incredibly blessed by the business’ success and his soon-to-be family of three, and is excited to see the business expand.

“We’re hoping to see some more new faces in here,” he said. “It’s been a lot of fun building it out.”

The new Quality Fitness is at 4201 Russell Road. For more information, visit http://qualityfitnessmukilteo.com.