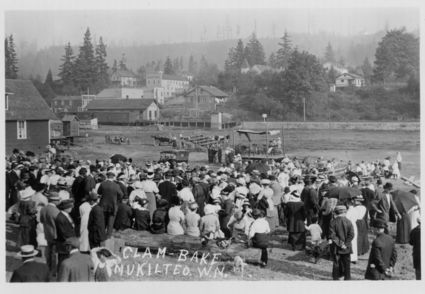 A clambake at Mukilteos ball field near the waterfront in the early 1900s.

In early 1966, a handful of members of the newly incorporated Mukilteo Historical Society (MHS) were searching for some way to increase awareness of the history of Mukilteo while also raising money for a future museum.

Some members recalled the popular clambakes of the early 1900s that brought together many residents of the tiny mill town of Mukilteo. It was from these nostalgic memories of simpler times that an idea for a new event emerged: the Mukilteo Pioneer Festival.

The first festival occurred on Sept. 10, 1966, and it exceeded expectations in every way, except financially.

Men grew beards to win prizes: the longest, the fullest, the fanciest, or the one that demonstrated the greatest effort with the poorest result!

Old bathing suits were taken out of mothballs for a swimsuit contest, and prizes were awarded for the best period costume.

There was a children’s Pioneer Parade, dinghy races, a host of “old time games” for adults and children, and dance presentations by Native Americans.

State Sen. Jack Metcalfe participated enthusiastically as the chief chef of the salmon barbeque (a tradition he continued for many years). An invocation was offered by Rev. Phillip Laurie from the Mukilteo Presbyterian Church, and a speech on the signing of the Point Elliott Treaty was given by Harriette Shelton Dover from the Tulalips.

Among the honored guests was Mrs. Pearl Hatten of Yakima, who had accompanied her husband and three children in the first car to cross on the ferry from Mukilteo to Clinton in 1919. A resounding success, the festival ended with a street dance featuring the “Dixiecat Jazzland Ballers.”

Success is said to have many fathers, but in this case it was the women of Mukilteo who led the way. Men were involved, of course, but the names of those most remembered as leaders of the effort include Virginia Phipps, Opal McConnell, Beverly Ellis, Randall Bump, and others.

While all could see and bask in the positive impact of the first festival, not everyone noticed the toll taken on the volunteers. As talk began for the next one, even before the first one was over, the Seattle Times quoted “one busy mother” moaning “we’ll be lucky if we live through this one.”

The Historical Society organized the next two Pioneer Festivals, but by 1969 the organization reluctantly reported that it was unable to continue as the prime organizer.

MHS did not have enough volunteers and the event had not become the moneymaker they expected. In fact, the 1970 festival, organized by the city with help from MHS and other groups, lost money and appeared to have been beset with internal conflict.

The challenge had become obvious. Festivals are expensive and require enormous amounts of volunteer time and talent.

In 1971, the festival was cancelled (although this decision was somehow not communicated to the Everett Eagles Band which suddenly showed up, resulting in a scrambling for chairs and an impromptu concert near the ffiferry depot).

The disappointing failure to hold a festival in 1971 led to increased soul searching among the citizens of Mukilteo. Fearing legal liabilities, the city stated adamantly that it would not sponsor the event and that it could only offer “moral support” in view of its financial condition.

Eventually a pattern emerged in which a private, nonprofit organization was created specifically to organize the festival, and the city, businesses, organizations, and individual volunteers would provide whatever organizational and financial support they could. This format has worked well for the most part, although there have been hiccups.

In 2004, when the city was unable to come up with an expected $35,000 (a bond levy failed and funds were desperately needed for emergency services), others had to rally around to save the festival.

The spirit of festival has remained robust throughout the past 50-plus years, even as the name has changed from the original Mukilteo Pioneer Festival to the current Mukilteo Lighthouse Festival; the timing has fluctuated between August and September and from one day in length to nearly three; and many of the selected sites, parade routes, and various arts, crafts, entertainment, and other activities have appeared, disappeared, and reappeared over time.

In 1970, a newly created Festival Committee named a “Man of the Year,” but when Clara Kane was chosen for the honor in 1972, the title became “Citizen of the Year,” as is the case today.

At the beginning, MHS honored the oldest living pioneer, but in 1982 the title became “Pioneer of the Year,” a tradition that has continued ever since.

Pioneers, politicians, parade marshals, and princesses have come and gone over the years, but the spirit of families, friends and neighbors coming together for a good time persists, and is remarkably similar to that of those Mukilteo clambakes of more than a century ago. 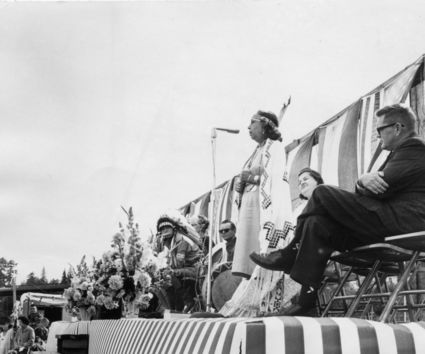 The first festival was fortunate to get Harriette Shelton Dover to speak at the opening ceremony.  She achieved a remarkable number of firsts as an early female leader among the Tulalips.