Lighthouse Festival could be on its last legs 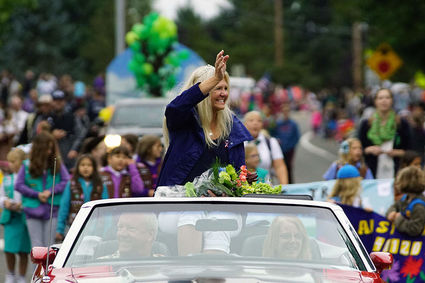 2017 Citizen of the Year Pam Taylor riding in the 2017 Mukilteo Lighthouse Festival parade, one of the more popular events of Festival weekend. Due to financial struggles, festival organizers need community help to keep the festival alive. Beacon File Photo.

There’s arguably nothing that Mukilteo residents look forward to each year more than the annual Mukilteo Lighthouse Festival.

This year’s will be the 53rd installment of one of Mukilteo’s longest traditions. It may also be one of its last.

Mukilteo Chamber of Commerce President Julie Martin says the festival has been on a financial downward spiral the last three years.

“There are two major factors that have contributed to the financial deficit of the Lighthouse Festival: dramatically increasing costs of the logistical needs of the festival, and declining business sponsorship,” she said. “In past years, businesses sponsored the community involvement and exposure. The last two years, many of our previous sponsors and those we have approached have indicated that it is a hardship for them to staff a booth all weekend, that they have to pay overtime, etc.”

“Last year, the festival did have a deficit, however it was able to receive additional funds from the Lodging Tax Committee to cover the deficit,” Martin said.

The city also assists the festival with grants to cover usage of Lighthouse Park and the Rosehill Community Center. This year, they received a $60,000 grant.

The city also uses a Lodging Tax Grant to pay police and fire personnel at the festival.

The festival has already undergone cutbacks to help reduce costs, including reducing the fireworks show to one night only  on Saturday.

“The festival has cut back on many areas including going from three shuttle parking lots to two, no longer providing sponsors with electricity (they now have to pay for their own. In the past it was a benefit of sponsorship),” Martin said. “Fencing around the artisan marketplace has been eliminated, fencing has been cut back behind the children’s area, the number of porta potties has been cut, the speakers for announcements throughout the park have been eliminated, lighting has been reduced (even though food vendors are staying open later to accommodate those staying later at the festival).

“The layout has been changed in order to reduce the number of electrical ramp covers needed for public safety.”

All of this, Martin said, results in the very real possibility that the festival could soon be a thing of the past.

“The Lighthouse Festival is a community celebration that is planned and run by volunteers,” Martin said. “Many of the board members and committee chairs will be cycling off the board after this year, and the festival is having a difficult time covering the expenses. Yes, there is a possibility that if it does not receive financial and volunteer support that it could become much smaller or not happen in the future.”

To help ensure that doesn’t happen, there are a few ways people can help.

A GoFundMe page has been set up to help cover the festival’s costs (gofundme.com/mukilteo-lighthouse-festival).

“Families can become ‘Friends of the Festival’ through the festival website (www.mukfest.com), businesses can sponsor the festival, and individuals can volunteer,” Martin said. “Volunteers are needed in all areas of the festival  logistics, artisan marketplace, children and tween areas, board members, chairs and weekend of the festival volunteers.”

Martin said the festival’s board members are working to make the Mukilteo community aware that they need help to keep the festival alive and running.

“We are hopeful that having this open dialogue will bring in enough support to continue the festival at the current level,” she said.

Martin also said they’re working to find which activities and events are attendees’ favorites. The parade and fireworks cost $6,000 and $35,000 respectively.

The board is considering moving Run-A-Muk, the annual 5K and 10K that raises money for the festival, to the spring or fall rather than just before the festival. This year’s Run-A-Muk was this past Saturday, Aug. 25.

This year’s festival is Friday through Sunday, Sept. 7-9, at Mukilteo Lighthouse Park. The festival opens at 4 p.m. Friday, and 11 a.m. Saturday and Sunday.