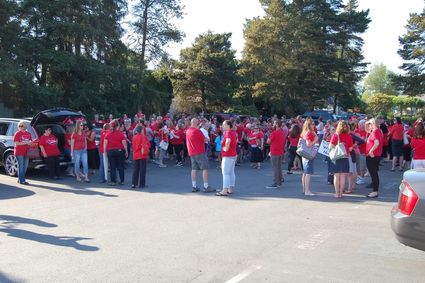 Sights like this, with hundreds of Mukilteo teachers in the Mukilteo School District parking lot, were common over the last few months while teachers aimed for a new salary agreement.

After months-long negotiations and threats of a strike, it appears Mukilteo teachers will be getting the raise they have been fighting for.

MEA members had given their bargaining team the authority to strike any time after Aug. 15 if no agreement was in place, but ultimately that wasn’t necessary.

The contract will now go before MEA members for ratification at their Aug. 29 meeting.

The salary dispute started during the spring, when teachers brought to light that the district didn’t want to negotiate new salaries with MEA since they were in the second year of a three-year contract.

The teachers claimed they had a right to an increase in pay due to the Washington state Supreme Court’s 2012 McCleary ruling, which provided school districts across the state with additional funds to fully fund basic education. Parts of those funds were to be used for teacher salaries.

What ensued was MEA filing a grievance against the Mukilteo School District, multiple packed houses at Mukilteo School Board meetings with longer than normal public comment periods, a vote of no confidence in the leadership of Mukilteo Superintendent Marci Larsen, and back-and-forth negotiations between the district and MEA.

According to MEA President Dana Wiebe, if the contract is approved as it stands, it would set their maximum salary for teachers with 12 or more years of experience and a master’s degree at over $112,000, up from roughly $99,000, and beginning teachers would earn just over $58,000 per year, an increase of nearly $7,000.

“This agreement was possible due to the engagement and advocacy of our union over the last few months,” Wiebe said. “More details will be released after our membership meeting.”

Mukilteo School District spokesman Andy Muntz said the district was happy to have an agreement in place.

“We're optimistic that our teachers are going to support the proposal,” Muntz said. “We're looking forward to the start of school on Sept. 5.”

Although all the specifics have yet to be released, Wiebe said all teachers will see improvements if the deal is approved.

“The bargaining team and I were pleased to inform the membership of our (tentative agreement),” Wiebe said. “Everyone will see gains  we still need to present the salary schedule in its entirety to the membership so they can debate and vote on it.”

More information on the specifics of the contract will be reported after MEA’s Aug. 29 meeting.