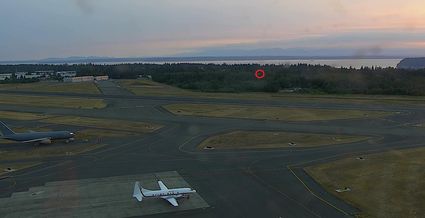 The drone, circled in red, flying over Paine Field on Wednesday, Aug. 8.

A drone caused quite the stir at Paine Field last Wednesday, Aug. 8, when surveillance footage caught it flying illegally over the west side of the airport.

According to a press release from Paine Field, nobody was injured, and there was no property damage from the drone’s presence.

But Paine Field Deputy Director Bruce Fisher was concerned about the incident, believing there was a risk that the drone could have collided with aircraft landing or departing from the airport.

“Drone operators need to understand the gravity of the situation,” Fisher said. “An airport is no place for...