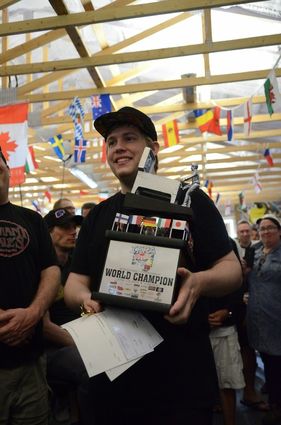 Pinball, what many people consider a simple arcade game, has taken a boy from playing games in the basement with his dad to a spot as the top pinball player in the world.

His rise to prominence began on his grandfather’s 1976 Pioneer pinball machine when he was just a toddler.

“Ever since I was tall enough to reach the flipper buttons, my dad and I would play,” Davidson said.

He fine-tuned his skills on a Black Rose pinball machine that he grew up playing whenever the Davidson family went to the neighborhood Red Robin. At 12 years old, with pinball becoming a mainstay in Raymond’s life, his family bought the machine.

“I basically had a leg-up being able to play on my own pinball machine,” Davidson said.

The Black Rose, which Davidson still has as part of his collection of nine pinball machines, is where he really got good.

“He got just these huge scores, he was just a kid and was getting scores that were 10 times higher than mine,” his father, Chris Davidson, said.

The pinball passion spread past the confines of his own machines.

By the age of 13, Davidson had entered his first competition, and from there he was hooked.

At the ripe age of 18, still not old enough to enter many of the pinball tournaments held inside bars, and with many of his competitors being 10 to 20 years his senior, Davidson competed in his first pinball tournament at the Northwest Pinball Tournament in Seattle, finishing second.

With this first big finish, a cycle was born. He used his winnings from the Pinball Championships to fund travel to further pinball events and add pinball machines to his growing home collection.

“It just kind of snowballed into my pinball empire of passion,” Davidson said.

Now 25, Davidson’s life isn’t all steel balls and flippers. The Kamiak High School graduate earned a Computer Science degree from the University of Washington, and is now working as a programmer in Bellevue.

His passion for pinball? That hasn’t waned; Davidson said he has used basically all his vacation time from work on pinball.

“A lot of weekends in the year I am completely busy, because I am flying somewhere to play in a pinball competition,” Davidson said.

His time at the machines and away from work has paid off. He is the two-time reigning world champion, and has traveled the world competing in a total of 253 pinball events, gathering 67 first-place finishes.

Davidson went from a high school kid with a pinball interest to the number one pinball player in the world, according to the International Flipper Pinball Association.

“It is really strange, because I feel like just yesterday I was discovering pinball,” he said. “I can’t believe how fast the years went by.”

With his current standings in the world, Davidson said he would be happy to stay right where he is.

“For me, I am still trying to get better,” he said. “There is always more to learn.”

With nowhere else to rise, Davidson’s goal is to win the two major tournaments that have eluded him thus far, the Professional Amateur Pinball Association Championships and the Pinburgh Championships.

Both competitions are in Pittsburgh, Pennsylvania, and Davidson has second-place finishes in both.

If he can get those victories, Davidson said he may consider retiring, reducing his competition load or switching to teaching the game he loves.

For Chris Davidson, his son’s rise to success is nothing short of amazing. 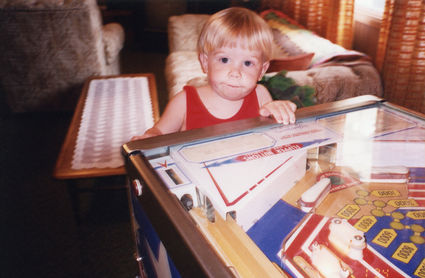 A young Raymond Davidson playing pinball on the machine that started it all, his grandfathers 1970 Pioneer pinball machine.

Raymond Davidson encourages anyone who is interested in trying out pinball to give it a shot. He recommended going to skill-shot.com to find a map of the nearest pinball machine locations.

If they think they are up for the test, Davidson eagerly awaits any opponents.

“I’ll take on any challengers,” the world’s top player said with a smile.