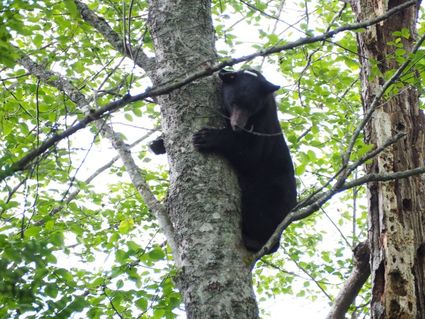 Heres the culprit! A Washington Department of Fish and Wildlife bear dog chased this bear up a tree between Kamiak High School and Harbour Pointe Middle School. The bear was spotted in Picnic Point and, later, Harbour Pointe.

It’s unclear if it was looking for honey like Winnie the Pooh or for picnic baskets like Yogi, but a bear cub was located, and eventually captured in Harbour Pointe this past Sunday afternoon.

The bear was reported to be between 120 and 150 pounds by the Mukilteo Police Department, and was first seen in the Picnic Point area Sunday morning. It was later located near Chennault Beach Road and Harbour Pointe Boulevard, and eventually made its way toward Kamiak High School.

The bear was captured in the wooded area between Kamiak High School and Harbour Pointe Middle School.

“It was a black bear that was marauding through neighborhoods in the area,” Captain Alan Myers of the Washington Department of Fish and Wildlife (WDFW) said.

Members of the Mukilteo Police Department assisted WDFW with the bear’s capture, and everything went smoothly on their end.

“Everything worked out well,” Mukilteo Police Chief Cheol Kang said. “The main thing was we wanted to get photos and the word out to the public so they knew to avoid that area. Priority number one is always making sure everyone is safe.”

Assistant Chief Glen Koen was one of the Mukilteo police officers on the scene.

“I was actually here (in their office) on other business when we got the call,” Koen said. “It was first sighted at On The Green where it showed up on someone’s back porch and destroyed their birdfeeder. It was later sighted at Baycourt.”

Koen said there was a 20- to 30-minute period where they lost sight of the bear, but they later saw it climbing a fence at Kamiak near the sport fields.

“We set up a perimeter over by Harbour Pointe (Middle School) while we waited for the Department of Fish and Wildlife’s bear dog to get there,” Koen said.

When the bear dog got to the scene, the bear was chased up a tree in just a few seconds, Koen said.

“We used a Karelian bear dog named Colter, who ran it up a tree,” Myers said. “We got it in the tree, tranquilized it and were able to safely capture it.”

Koen said when the sedative kicked in and the bear got drowsy, it climbed back down the tree and WDFW officers were able to secure it in the bed of a pickup truck.

Myers said when the bear was out of its drug-induced state that it was safely released into an area in the wild that is “far away from people.”

Koen said it took around three hours from the first call to the police department until the bear’s capture.

In photos, the bear was shown to be wearing a collar, which was part of a study on black bears by a WDFW biologist in order to track the bears.

Myers also confirmed that the bear was originally seen in the Picnic Point area on Sunday before making its way to Mukilteo. 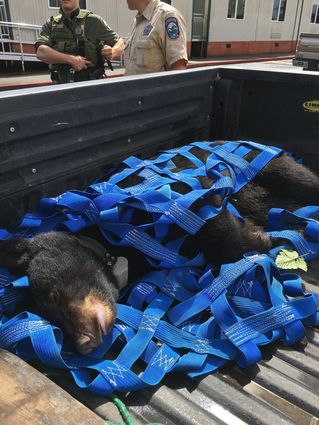 The bear after being tranquilized by Washington Department of Fish and Wildlife officers on Sunday. The bear was safely released into the wild in an area away from people according to WDFW Captain Alan Myers.

“Bears are very mobile and get from one place to the next quickly,” Myers said.

There were multiple bear sightings in south Snohomish County over the last week as well, and Myers believes the bear they captured on Sunday is the same bear that put a Lynnwood school on lockdown Friday, and was rummaging through garbage cans in Mill Creek over the weekend. Myers said this same bear also may have been one that was spotted in Duvall last week as well, but they are unsure.

Bear sightings in Mukilteo are very rare, according to the Mukilteo Police Department.

Officer Shaun Greenmun said this was just the third bear sighting in Mukilteo in the last 20 to 30 years.