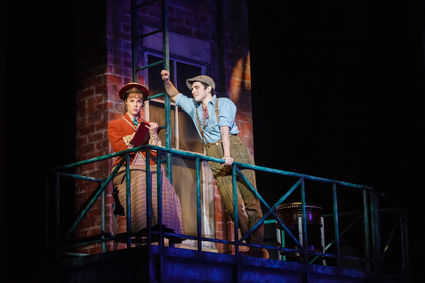 Taylor Niemeyer (Katherine) and Joey Barreiro (Jack Kelly) star in Disney's "Newsies." The production takes the stage at Everett's Village Theatre Jan. 5. Due to popular demand, the show will be extended for an additional week in Everett. photo.

Based on the Newsboys Strike of 1899, the musical narrative follows Jack Kelly and his crew of newsboys who become unlikely heroes when they stand up for what’s right.

“I couldn’t be more excited to have ‘Newsies’ as one of my final shows as artistic director at Village Theatre,” said director, Steve Tomkins. “We have a truly exceptional cast that is going to blow everyone away. While we’re certainly looking to honor and celebrate the film and the Broadway show, we’re creating our own unique Village Theatre production.”

There is no better example of that than the dance scenes choreographed by Katy Tabb.

“Every aspect of this show is being built to facilitate some really incredible dancing,” said Tabb, “The music, costumes, and jungle gym-like set combined with this phenomenal cast is thrilling.”

Taking on the role of Jack Kelly is Joey Barreiro.

While Barreiro is new to the Village Theatre stage, he is not new to Jack Kelly, having spent a little over a year in the role on the First National Tour of “Newsies.”

“Seize the Day” with the newsboys of New York as they go from delivering the news to topping headlines.

For more information on tickets and the show itself, visit http://villagetheatre.org/everett/newsies.php.