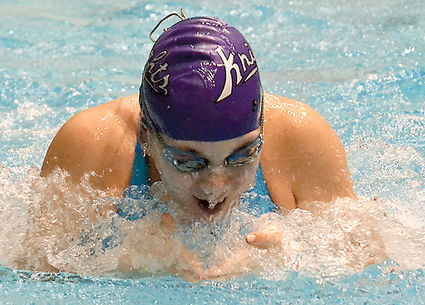 For the first time in more than a decade, Kamiak brought home some hardware from the State Swimming and Diving Championships.

Led by sophomore Elli Straume’s pair of top four finishes, the Knights placed fourth overall at the 4A championships Saturday, Nov. 11, at the King County Aquatic Center in Federal Way.

The last time Kamiak returned with a state trophy was in 2005.

“It was one of our goals,” Knights coach Chris Erickson said.

“I felt really confident,” Straume said. “I feel like all my hard work during the season really paid off.”

The 200 freestyle challenged Straume physically because it immediately followed the 200 medley relay. Straume, along with teammates Song-Nhi Vo, Grace Hatscher and Ava Collinge started off Saturday’s meet with a solid third place finish in 1:48.33.

Straume did a quick warm down, joined her teammates on the podium to receive their third place medals and then got back into race mode for the 200 freestyle.

“I had to put that (200 medley relay race) behind me in order to focus on my individual race,” Straume said. “I had to quickly transition. My teammates helped guide me.”

During the second half of the race, Straume said she could feel the effects of swimming back-to-back races.

“It was definitely hard,” she said.

But Straume reminded herself to “keep up the tempo and stay in the race.”

Straume came into the 100 freestyle finals hoping for a little faster time but had to be satisfied with another school record.

“I was pretty pleased with it,” she said.

“Elli did better this year than last,” Erickson said. “She’s only a sophomore.”

Kamiak’s 200 freestyle relay team of Vo, Hatscher, Collinge and Straume took second place. The Knights’ time of 1:38.26 was the fourth fastest in meet history and was close to last year’s winning time of 1:37.74 by the Knights. Two members of that relay team graduated.

“We were really happy,” Straume said. “For us to be able to get that close in time was very exciting.”

Vo also placed 11th in the 50 freestyle. Mariner’s Emma Melgardshagen was 10th in the 100 freestyle.

Erickson was named 4A Coach of the Year for the third time, an honor that he credits to the coaching staff and the swimmers.

“I always tell the kids it’s because of you,” Erickson said. “This is yours.”

Erickson said that the rivalry with the Timberwolves definitely helped the Knights, who have normally finished behind Jackson at the state meet.

“We’re always battling and pushing each other,” Erickson said. “We squeaked ahead of them. It’s the first time we’ve been ahead of them.”