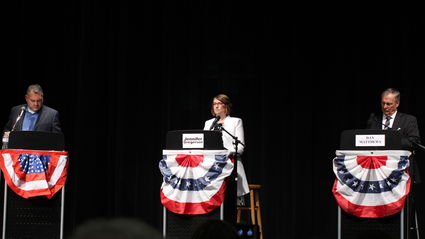 Mayor Jennifer Gregerson (center) and challenger Dan Matthews (right) prepare to answer a second round of questions at Rosehill Community Center on Oct. 25. If elected, both candidates expressed their intention to include the publics input on a host of issues facing the city.

While challenger Dan Matthews and incumbent Jennifer Gregerson at last week’s Mayoral Forum agreed on the importance of a permanent senior center and preserving the character of downtown Mukilteo, their views diverged considerably on topics related to the budget, taxes and future projects facing the city.

Matthews said that at this time he is not in favor of Proposition 1  which would raise retail taxes by 0.1 percent and fund pavement and sidewalk improvements  because he believes the city’s finances are not in order. He expressed a desire for the community to reassess its priorities.

“I think what’s happened is we’ve gotten sloppy,” he said, pointing to a decrease in the city’s reserves over the last 10 years.

“We’ve gotten used to going to the well too often,” he said.

Matthews also criticized what he described as a decision by the Mukilteo City Council to delay the release of next year’s budget until after the election, and he questioned the council’s openness.

“I think if they have got ideas on how to raise revenue ... they need to be upfront about that and direct to the public because we need to know what their plans are and what their vision is as far as finances,” he said.

Gregerson said she supports the proposition. She said that the city has involved the community in the process, citing a transportation task force formed in 2015 that included input from business owners and residents.

She said the sales tax is the fairest available option.

“It’s the only one that allows us to share the costs with visitors to the community who are driving on our roads but not paying the same way that they would if the council had looked at property tax or car tabs,” she said.

She added that the City Council has made cuts elsewhere in the budget in order to help fund transportation.

She also addressed Matthews’ concern about a delay in the budget, saying that it would be released online by the end of October, as required by law. She also said the council only discussed delaying next steps for transportation funding, “not the proposal of the budget itself.”

Gregerson said her priority would be to make sure the budget is balanced and that the city is able to deliver on current projects like the Harbour Reach Corridor, which would add an alternate north-south route to State Route 525.

Matthews said, as mayor, his budget priorities would include making better use of its existing facilities. For example, he said schools could be utilized by the city outside of the typical eight hours for things like intramural activities and educational classes open to the public.

Before the candidates took their places, Joe Fitch, who moved to Mukilteo from Marysville in May, said he was still undecided on his vote for mayor. He hoped the forum would help fill gaps in his knowledge about the city and help him make an informed decision. He included nearby Paine Field Airport, Proposition 1 and the city’s financial decisions in his list of top concerns. “We gotta watch where the money’s going,” Fitch said.

Matthews said he knows how to approach the issue of aircraft noise over the community, in light of failed legal challenges to Paine Field’s expansion to include commercial passenger flights. He described several procedures he believes can significantly reduce noise, including having airplanes use the full stretch of the runway as they depart and making sure private aircraft do not make turns below a certain altitude.

“I think the principals in this are going to be good neighbors, and we’re going to be engaging them in a professional way,” he said.

Gregerson said she is working to earn the airport’s cooperation.

Although she said she respected Matthews’ experience in the Air Force as a pilot, she added “that doesn’t make you a land use expert.”

“We need someone who knows the players,” she said.

Another topic the candidates diverged on was a potential annexation.

“We’d better be careful,” Matthews said when asked if he would support such a move.

Referencing a 2010 advisory vote on the South Mukilteo Annexation Area, he said most people were against it and that the costs associated with providing services to added areas would be significant. But he added that he would support the City Council to thoroughly investigate the issue.

Gregerson clarified that what the people rejected in 2010 was a larger annexation and that the city is currently studying what she referred to as a “baby annexation” that would include the east side of the Mukilteo Speedway south to Beverly Park Road as one step in a three-step plan.

She said the direction the council is taking on a smaller annexation makes sense, but added it was important to study thoroughly. She also pointed out that the city was already providing services to some areas being considered, but without the tax revenue. 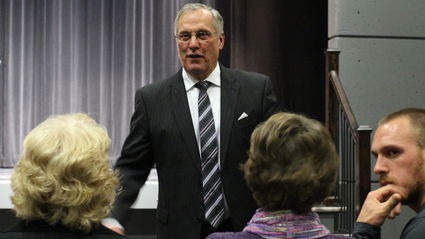 Dan Matthews speaks with audience members during a break in the forum. In his closing remarks, Matthews said Mukilteo is ready for leadership that is committed to communication with the community.

On the topic of Mukilteo’s Multimodal Project, which will relocate the city’s ferry terminal and improve safety and traffic, Gregerson said there are plans in place for new stores and restaurants. Both private and public parties have offered to fund parking, she said, and she knows who to contact if there are problems.

Matthews said he would like to see the citizens of Mukilteo work with the Washington State Department of Transportation and get involved in decisions about parking, traffic and access to the waterfront.

“What we have here is a jewel,” he said of the city.

Voting ballots for Snohomish County’s 2017 general election are due Nov. 7.