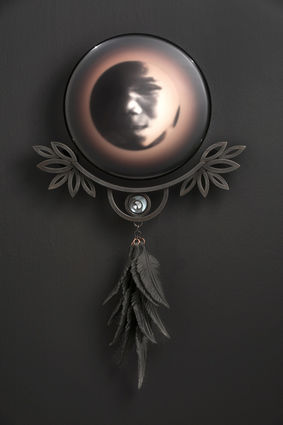 For 25 years, Jenny Pohlman and Sabrina Knowles have collaborated to produce sculptural stories in glass that reflect lessons they learned from life and travels about healing, self-empowerment, compassion, strength, grace and the power of the human spirit, particularly as relates to women.

From 5-8 p.m. Thursday, Oct. 5, the Schack Art Center in downtown Everett opens Lodestar, featuring Seattle glass artists Pohlman and Knowles. The show will remain in the Main Gallery through Nov. 4.

The Himba Portrait Series highlights the indigenous nomadic culture in Northern Namibia and Southern Angola. To create the portraits, the artists incorporate a screen-printing technique and fire glass enamels to make the image appear on the base of the glass sculpture. The narrative of the objects is derived from their impressions of the ancient culture and the magic of African life.

“This particular series is all about the song, the voices of the indigenous,” Pohlman told the Seattle Times in May 2016. “We've always believed that the West would do well to engage indigenous populations and learn what we've forgotten as we've stepped away from being an Earth-based culture.”

After lengthy incubation, they morph their experiences into sculptural stories to share what they have learned. Their intention is to create works that speak of our common humanity.