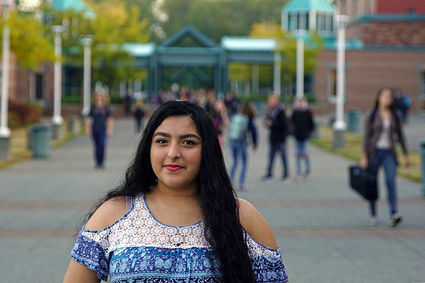 “Community service has really saved me,” the Kamiak High School junior said. “I feel so much more complete now.”

At age 9, Handa was diagnosed with Crohn’s Disease, a chronic inflammatory bowel disease that affects the lining of the digestive tract.

“I felt really helpless and depressed,” she said. “I was really secretive about it. I never told anybody until I entered high school.”

As a side effect of her medication, she began to gain weight.

“In middle school, I was becoming obese because of the medicine,” she said. “I was really worried about my body image, and I would be absent for weeks at a time.”

During the summer before her freshman year at Kamiak, Handa attended Camp Oasis, organized by the Crohn’s & Colitis Foundation of America.

“I met people who understood me and accepted me for who I am,” she said.

Once school started, she followed in her older siblings’ footsteps by joining service groups such as Key Club and Human Rights Club.

“I decided I didn’t want anyone else to feel the way I had, so I began joining service groups,” she said. “I met the most amazing people I’ve ever know. They helped me take a positive outlook on my life and my journey with this disease.”

Then, last September, a friend and classmate  Nina Smiljanic  committed suicide. That same night, Handa noticed an outpouring of support and condolences on social media, but when she got to school the next day “it was like nothing had happened.”

“It was surreal,” she said. “I thought more people would care about it. And people did care, but teens have learned to express their emotions in cyberspace, not in reality.”

Over the summer, she celebrated Smiljanic’s birthday with family.

“Celebrating her life reminded me of why I wanted to talk about community service,” she said. “It’s so that we have a stronger community where people feel more included. I want to be one of those youth speakers trying who connects with other teens in the audience and shows them how much of an impact they can have on their community and the people around them, so they can find their purpose in life.”

Dalal wasn’t able to make a TEDxYouth event at Kamiak happen before graduating in June, but Handa plans to carry that torch and find a way to make it happen.

Before then, however, she’ll be taking the stage Nov. 4 at Kamiak for TEDxSnoIsleLibraries 2017. This year’s theme is “Sharing Our Future,” and Handa hopes to help her fellow teens see just how shared and interconnected our futures are.

For Handa, devoting herself to service projects, to helping others any way she can, she’s no longer consumed with depression. Instead, Handa said she feels liberated  happy, even. She’s so busy volunteering and serving wherever she can that she has little time to think of herself, she said.

“You don’t have to have a chronic illness like me or be a victim of suicide like Nina to feel alone and helpless and out of control,” she said. “I want people to understand that everyone feels this way. We can help teens feel good about themselves by showing them the power community service, the power of serving others.”

Through community service, teens can make real-life connections with the people and the world around them. And that, Handa said, can be a lifesaver.

“I really believe that community service isn’t the right thing to do,” she said, “it’s the best thing to do.”