Signs of the times 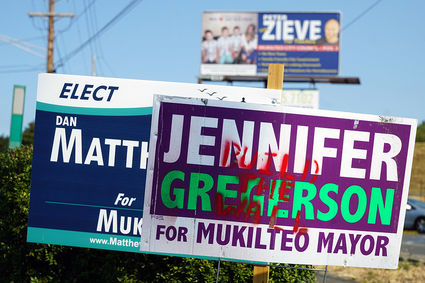 One of Mayor Jennifer Gregersons campaign signs along the Mukilteo Speedway is tagged with Build the wall Monday, Aug. 28. City Council Position 2 candidate Peter Zieves billboard advertisement, which went up Monday, Aug. 28, can be seen in the background.

Anyone who has ever run for public office will tell you that despite rules to the contrary, campaign signs will inevitably be stolen, damaged and tossed aside.

Last weekend, a less common fate befell a slew of such signs up and down the Mukilteo Speedway, from the intersection with Paine Field Boulevard on the north to Beverly Park Road on the south: using stencils and spray paint, someone defaced most of this season’s campaign signs with political messages of their own.

All referring to President Donald Trump, messages such as “Build the wall,” “Trump 2020” and “America loves...