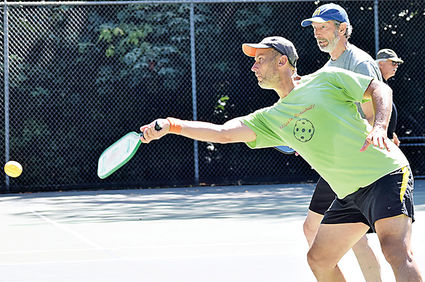 Called the fastest growing sport in America by NBC News, pickleball is expanding especially rapidly in the Pacific Northwest.

Todd Cort has been witness to the surge in pickleball’s popularity during his nearly 13 years as recreation supervisor for Edmonds.

“We had players asking about leagues, so we purchased brand new equipment and started leagues, fairly small to begin  15 to 20 people  and over the years we’ve grown substantially,” Cort said.

Edmonds’ Frances Anderson Center now sees between 60 and 66 people coming to play in pickleball tournaments every Tuesday night. They play doubles on Tuesdays, meaning at least 30 teams are usually participating.

Pickleball was started on Bainbridge Island by former Washington Rep. Joel Pritchard and a couple friends in the summer of 1965. It was named by Pritchard’s wife, Joan, after the pickle boat in crew  a boat where the rowers are chosen from the leftovers of other boats. Pickleball is pieced together from other racket sports, as the pickle boat is a combination of remaining rowers. The Pritchards originally played the sport on a badminton court with ping-pong paddles and a wiffle ball.

Roger BelAir has been playing pickleball for about five years and teaching it for the past several. He describes pickleball as a combination of tennis, badminton and whiffle ball.

“I like to call it ‘tennis on steroids,’ because what you do is you move in toward the net and stand about seven feet away and bat it back and forth like you’re playing in a ping-pong game,” BelAir said.

The game is played on a badminton-size court (20 feet wide and 44 feet long), a net similar to that in tennis, solid paddles and a perforated ball. The ball is usually slightly larger and heavier than a wiffle ball, and has circular holes instead of oblong.

Games are normally played to 11  but tournaments can be longer  and must be won by two points.

“It’s on a much smaller court, so it’s not like tennis, which is a power game. It’s more of a touch game, more of a finesse game,” BelAir said. “It’s more a matter of hitting it where they aren’t, as far as your opponent, as opposed to trying to overpower them.”

Even though it was invented in the 1960s, the game began spreading rapidly in the early 2000s. BelAir explained that the game has become popular for a variety of reasons.

“It laid somewhat dormant until probably 2005. At that time, it was kind of discovered by retirees down in Arizona and in Florida,” he said. “A lot of these people played tennis before, but they said, ‘here’s a sport we can play that’s much easier on the joints, it’s much easier to learn  you can learn it in an hour  it’s very social because almost all the games are doubles, it’s great exercise and most importantly, it’s fun.’”

“I’ve never gone back to tennis, I don’t miss it one bit,” she said.

While much of the pickleball demographic is made up of older adults, some schools and pickleball clubs have programs for kids. Scantlebury is also trying to start teaching a class for children, which might happen next year. It’s a sport that can be played by a wide range of ages.

“If someone’s athletic, there’s a benefit. But it really transcends that, where it’s very common to see grandparents play with their teenage grandkids,” BelAir said.

Edmonds has several different locations to play pickleball, with the majority of courts located at Yost Park. The tennis courts there have been striped to allow for eight pickleball courts.

The city of Edmonds is refurbishing the courts in Yost Park, a project that started on Aug. 1. According to Cort, four permanent pickleball courts are being put in. While players are appreciative, a problem remains.

“We have a problem with courts, especially indoor,” Scantlebury said.

“Right now, they’re talking about outdoor courts, but the problem with that is that doesn’t help in the winter months,” she continued. “So in the winter, all we have is Frances Anderson and then we have to go into Seattle.”

There are also five indoor and four outdoor courts at Harbor Square Athletic Club, but the courts are only available to club members. Harbor Square has open hours for pickleball for an hour and a half on Mondays, Tuesdays, Thursdays and Sundays. At other times, club members can call in advance to reserve a court.

The lack of indoor courts becomes especially limiting, as the weather grows wet and cold. Therefore, as Scantlebury said, pickleball is growing more rapidly in sunny places: Arizona, southern California and Florida being the top three.

Cort is well-aware of the problem, but says the city isn’t able to do anything because there are no other locations to put indoor pickleball courts.

“The only availability in the city is Frances Anderson Center; we have no other locations,” he said.

Besides the accessibility of courts, there are other important changes coming as a result of pickleball’s increased popularity.

“They’re talking more and more, the people at USAPA [U.S.A. Pickleball Association], about having instructors that are actually qualified by going through the USAPA program [and] having tournaments with refs or officials that have gone through a process,” Scantlebury said. 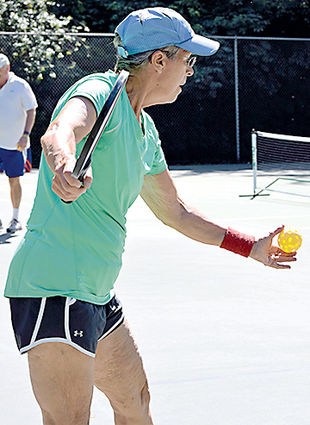 While she doesn’t know if this will be a good thing or not, it does show that the USAPA is becoming more organized and working to make pickleball a more widely known sport.

With the growth that pickleball is currently experiencing, it’s hard to know what will be in store next for the sport. BelAir thinks pickleball’s future is especially bright.

There’s one thing everyone seems to agree with: Pickleball is growing like crazy.