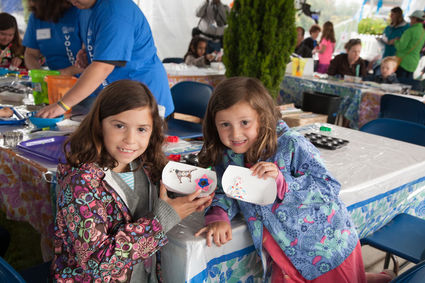 Kids can get involved in the Edmonds Arts Festival by creating their own crafts.

What’s your festival? A Taste of Edmonds? Or the Edmonds Arts Festival?

Two of the city’s two most popular festivals have their super fans  do you revel in a slice of good-old Americana (the Taste) or prefer a more refined sensibility (the Arts Festival)?

If the latter is your pick, this weekend is the bee’s knees, as the Edmonds Arts Festival celebrates its 60th anniversary Friday through Sunday, June 16-18.

“It’s grown over the years to not just a regional event, but beyond that,” Edmonds Arts Festival President Diane Cutts said.

The festival’s popularity  artists love it, too  hasn’t gone unnoticed. The publication Art Fair Sourcebook this year ranks it No. 1 in the state in fine arts and No. 2 overall in the Northwest.

When you visit the festival, you can be assured that every piece of art from more than 200 artists has been judged worthy of inclusion. “There’s a jury process for everything, so that we know we’ve got the best of the best,” Cutts said.

More than 1,000 pieces were submitted (about 600 make it) for three galleries: paintings, prints and drawings; three-dimensional artwork; and photography.

Judges choose winners, who received cash prizes from $50 to $800. All artwork is for sale.

A key element of the festival  as parents past and present know  are the more than 1,000 juried pieces of art from K-12 students, in partnership with the Edmonds School District.

“The student art exhibit is one of our most important events,” Cutts said. “We cherish that part of the festival. We think it’s just about the top thing there, having our students be recognized.”

Of course, plenty of artist booths will be on the Frances Anderson Center field, as well as the library plaza. More than 240 booths actually, which will be selling ceramics, glass, painting and pastels, jewelry, metal, mixed media, photography, sculpture, garden art, clothing, crafts and more.

The performing arts are represented, too, and will be making their debuts under the new bandshell. Artists range from dance groups, middle and high school orchestras and jazz bands, singer-songwriters and actors from Edmonds’ own Phoenix Theatre.

Of course, you’ll need refreshments after browsing and buying all that fine art. There’s local beer and wine in the plaza, and food booths at two locations. What’s offered? Bratwurst, salmon, gyros, burgers, corn on the cob and the like.

In the festival’s inaugural year, the Coterie Club of Edmonds invited 15 artists to show their work at the Surf and Sand Marina, home now to the Senior Center. Then known as the Edmonds Spring Arts Festival, Edmonds High School teacher Frank Cunningham suggested the idea to the Coterie’s Peggy Harris. The next year, the festival was held at the American Legion Hall.

Edmonds oldtimers might remember the disastrous third year, when a decision was made to hold the festival outdoors, on Main Street between Fourth and Fifth avenues.

The weather didn’t cooperate, of course, and whistling wind sent pictures flying, and rain ruined many a piece of art.

After being held at the Carnegie Library (now the Edmonds Historical Museum) and other locations around town, since 1980 the festival’s artwork has found its home  inside  at the Anderson Center. The booths remain outside, though, so a sudden downpour could put a damper on festivities.

If it does rain, and global warming usually makes an appearance on Father’s Day weekend around here, the festival’s directors and hundreds of volunteers will be ready to help keep things in order.

Originally, volunteers paid all event expenses. When the festival began making a profit in the early 1960s, the nonprofit Edmonds Arts Festival Foundation was formed and volunteers could stop being financiers. Now, festival proceeds, sometimes exceeding $50,000, are directed to the Foundation.

The Foundation’s stated mission is to give back to the community, encouraging dedicated volunteers and sponsors to contribute in a number of ways.

Over the years, special events before the festival’s opening have been added. An invitational celebration for juried gallery artists is held to thank all artists who submitted work and to present awards to those selected by jurors.

Another addition is a themed benefit party at the Frances Anderson Center, also held before the festival opens. Juried galleries are open, all art is for sale, and student art is on display.