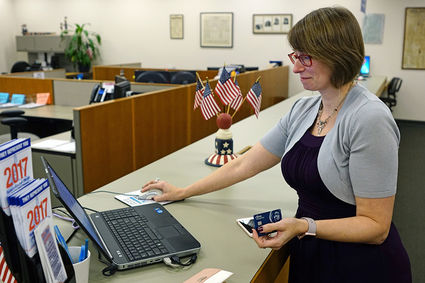 Mayor Jennifer Gregerson files for re-election Monday, May 15, at the Snohomish County Auditors Office. Using a computer at the office, Gregerson completed her filing in less than a minute.

Seven elected offices are up for grabs this year, and there’s still time to throw your hat in the ring.

The window to file for elected office with the Snohomish County Auditor ends at 4 p.m. Friday, May 19.

To file, go online to http://www.snoco.org/elections any time of day or visit the auditor’s office on the first floor of the Administration West Building at 3000 Rockefeller Avenue in Everett between 9 a.m. and 5 p.m.

As of Wednesday afternoon, Mayor Jennifer Gregerson had filed for re-election with no challengers yet.

City Council President Bob Champion had filed for re-election to his Position 2 seat, and Christina "Tina" Over had filed to challenge him for that seat.

School board members Judy Schwab and Geoffrey Thorp are up for re-election, but as of Tuesday afternoon, Thorpe was the only one to have filed for re-election.

Water and Wastewater District Commissioner Mike R. Johnson has also filed for re-election without any challengers.

Some 177 county and local offices are up for grabs on the 2017 ballot.

“These local races, from city councils to schools and ports, are extremely important to communities and their citizens,” state Elections Division Director Lori Augino said.

“If you’re a citizen who wants to make a difference and run for elected office, your first key step is filing for office.”

The top two vote-getters in any race in the Aug. 1 primary election will move on to the Nov. 7 general election.

In an off-year election with no congressional or statewide races on the ballot, nearly all of the 3,100-plus offices open for this election are local  such as city council, school district, fire district, port district and other races, including Seattle mayor.

There are also eight special legislative races, two Court of Appeals elections in King County, and one Superior Court race in both Spokane and Yakima counties.

“It might be considered an ‘off-year’ election, however these elections can impact people as much as a big presidential election year, if not more,” Augino said.

“There are so many local races that affect communities, large and small, across Washington.”

To file for office, an individual must be a registered voter. Positions may have additional requirements, such as being a registered voter within the district, residency within the city or town of at least one year, a minimum age, or a filing fee. Requirements for each position can be found in the 2017 Candidate Guide posted at http://www.snoco.org/elections, including a complete list of offices up for election, candidate filing fees, and position qualifications.