Mariner area to get its own library soon

The new Mariner Library will be just off 128th Street Southwest near the Albertsons store in replace of an old yoga studio.

A “demonstration library” is scheduled to open next year in a 3,600-square-foot retail space at 520 128th St. SW near the Albertsons store.

“This has been a long time coming,” said Sno-Isle Libraries Executive Director Jonalyn Woolf-Ivory. “If not for the recession, this library would have opened years ago. Now, we’re moving as quickly as possible to give this community the library service it deserves.”

Woolf-Ivory said the library is scheduled to open no later than March of next year.

“I’d really like to open the doors in January,” she said. “However, there is a lot of preparation that goes into opening a library, so we’ll have to wait a bit.”

Sno-Isle Libraries adopted a 2016-25 Capital Facilities Plan in June that recommended more services be added to three communities without libraries, including near Mariner High School.

The plan notes that the Mariner area is underserved by the library district  the community is far from the Mill Creek, Mukilteo and Lynnwood libraries  yet it has a population of 30,000 that is predicted to grow within the next 10 years.

Woolf-Ivory said that because there are no nearby libraries, the community either travels long distances to get to a library or decides not to go.

While working on the 10-year plan, the Mukilteo School District helped the library district set up a survey for would-be patrons of a library near 128th Street Southwest. About 300 responded to the survey.

In the survey, Sno-Isle Libraries asked whether the Mariner area needed a library. Of those who responded, 99 percent wanted a library.

“Our students  have requested to have a Sno-Isle library branch for several years,” said Stephanie Wilson, the librarian for Mariner High School. “While students at Kamiak can take a short walk to the Mukilteo Library, our students don’t have a library within walking distance.”

The Capital Facilities Plan calls for a demonstration library that goes beyond the current weekly library bookmobile services offered in the Mariner area.

“Our staff and students have had access to the Sno-Isle bookmobile for the last 10 years, which has been fantastic, but students are looking forward to having access to all the amenities that come with having a new branch open,” Wilson said.

Woolf-Ivory said the new library is a “demonstration” because it will be temporarily set up in a leased space so that its patrons can demonstrate their wants and needs for a permanent building in the Mariner area.

“It will be a full-service library,” she said. “We’ve signed a five-year lease and, during that time, we’ll find out more about where and how a permanent facility should serve this community.” 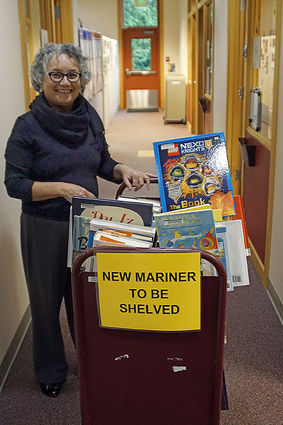 Sno-Isle Libraries Executive Director Jonalyn Woolf-Ivory with books that are destined for shelves at the new Mariner Library.

Survey respondents also asked that the new library focus on meeting the needs of students from nearby schools, offer classes and space for English as Second Language programs, provide access to technology and the internet, and be located near a park-and-ride or bus stop.

The Mariner Library will feature a meeting room, study room, laptops, free wi-fi and a collection of bilingual, language-learning and early literacy materials. There also will be places to read comfortably.

Renovations to the leased space will cost an estimated $200,000.

Sno-Isle employees will transfer to new positions at the Mariner Library to keep costs down.