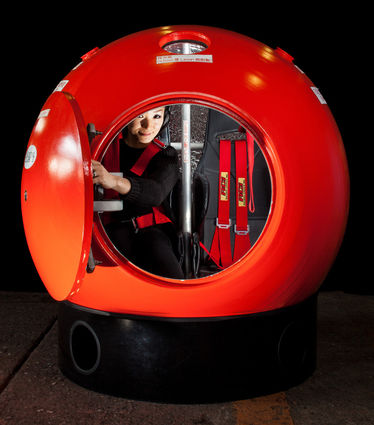 Engineers from Survival Capsule LLC in Mukilteo have developed a sphere-shaped shelter that is designed to save people from the devastation of tsunami.

When most are selling their homes out of fear, Jeanne Johnson just bought a house in Long Beach’s tsunami hazard zone.

The Pacific County beach faces two types of such hazards: tsunamis from distant earthquakes on the Pacific Rim  like the 2011 magnitude 9.0 quake near Japan  and tsunamis caused by an earthquake along Washington’s coast.

That’s because Johnson is first in the world to buy a pod designed by a Mukilteo team of aerospace engineers to help people survive a tsunami.

Survival Capsule LLC in Mukilteo has developed a sphere-shaped shelter to save people from the devastation of tsunamis or other natural disasters by allowing them to ride a tsunami rather than run from it.

“When I decided to move to Long Beach, I knew I would either need to find a home at high elevations or find a shelter solution so I could realize my lifelong dream of having a house on the Pacific Ocean,” Johnson said.

“Luckily, I found Survival Capsule, so I can now have the perfect beach home and know that should there be a threat, I can shelter in place in safety and survive.”

The aluminum spheres, which hold 2-16 people, are designed to withstand impacts, fire and submersion during a tsunami.

Design features include watertight doors, portholes, seats with five-point harness belts and head restraints, and a thermal blanket between the inner and outer shells in case of fire.

The shelters have emergency beacons, transponders, and hooks for helicopter pick-up to aid in recovery.

While Johnson’s two-seater shelter was built in Mukilteo, future orders will be completed by Japanese manufacturers in the Mie, Okoyama, Kofu and Shizuoka prefectures.

“We’ve done a lot of work in Japan,” said Julian Sharpe, president and CEO of Survival Capsule. “That’s our main focus because the Japanese have a huge problem with tsunamis.”

As hers is the first, Johnson’s came with the price tag of a car. When Survival Capsule receives more orders, the price to manufacture the pods will go down. Already, 400 have signed up to buy at least one.

“It’s a life insurance policy,” Sharpe said. “It’s like a fire escape on the side of your building, it’s like a smoke detector. It’s there to give people committed to living on the ocean some peace of mind.”

When Johnson moves into her new home  it’s set to close Nov. 18  the company will install her tsunami shelter. It will be anchored in her yard and tethered with a metered steel cable.

If and when a tsunami reaches Long Beach, Johnson and her dog will ride the wave.

“People panic in a natural disaster,” Johnson said. “With everyone trying to drive out to high ground or to a community shelter at the same time in the few moments between quake and wave, anything can happen to block the escape route, leaving everyone at risk out in the open where they would most likely die.”

Four engineers from Survival Capsule, with the help of a tsunami expert, developed the spherical shelters after the earthquake and tsunami near Japan killed nearly 16,000 people in 2011.

Sharpe’s vision is that the shelters, which are patented, will be bought by the Japanese government, as well as schools, hospitals, airports and businesses, to protect people from the devastation of a tsunami.

Along with the Japanese market, Sharpe said the company plans to sell to other markets around the world where people are at high-risk, including in Washington, Oregon and California.

Within the next 20 years, scientists predict that Japan and Washington will be hit hard.

A 9.1 earthquake and tsunami near Japan is predicted to kill an estimated 400,000 people.

A tsunami caused by an quake of magnitude 8.0 or greater along the U.S. Pacific Coast is estimated to reach a death toll of 10,000.

For more information on Survival Capsule LLC, go to http://www.survival-capsule.com.