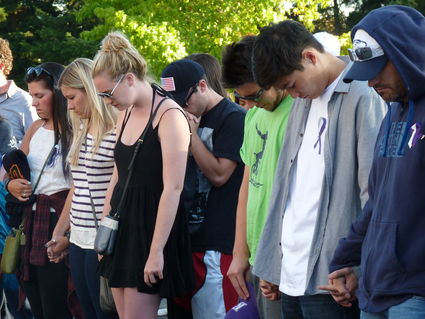 Friends and family of the three victims killed in Saturday's shooting bow their heads in prayer during a vigil held Sunday evening at Mukilteo's Church of Jesus Christ of Latter-day Saints. Pastor Ken Long of Northshore Christian Church led the prayer.

Mukilteo is mourning after three Kamiak High School grads were shot to death at a house party early Saturday.

Anna Bui, Jake Long and Jordan Ebner, all 19, died when a gunman opened fire at a gathering of 15-20 friends from Kamiak, most of them recent graduates, at a Mukilteo home just after midnight.

Since their deaths, the Mukilteo community has banded together to honor them in many ways.

A memorial is set up in a Kamiak parking lot with photos of the three who were killed and surrounded by candles, flowers, balloons and notes to the teenagers. The shrine continues to grow.

The Snohomish County Medical Examiner’s Office has classified their deaths as homicides, the first in Mukilteo since 2002.

A fourth victim, Will Kramer, 18, was shot in his shoulder and was transported to Harborview Medical Center. As of Tuesday, he was listed in satisfactory condition.

Ivanov, 19, also a Kamiak grad, was charged on Aug. 2 with one count of aggravated murder, two counts of murder and one count of attempted murder. All of the charges are in the first degree.

"Our community has suffered a great loss," Mayor Jennifer Gregerson said during a press conference. "We grieve with the families of those lost in this horrible event. There are no words that can measure the pain that they’re feeling.

"All I can say is that we will stand with them and be here with them.”

Police responded at 12:08 a.m. to reports of multiple gunshots to a house in the 10000 block of 64th Place West in the Chennault Beach neighborhood, said Myron Travis, spokesman for the Mukilteo Police Department.

When officers arrived, they found three victims were dead from gunshot wounds and another who was injured.

Witnesses at the party told police that they knew the gunman and described his vehicle for them.

Ivanov was stopped on 1-5 at 1:50 a.m. by state troopers serving Lewis County on southbound I-5 near Chehalis  about 120 miles south of Mukilteo on 1-5. He had been driving 18 mph over the speed limit. An AR-15 rifle was found on the passenger seat of his car.

He was arrested and later booked into the Snohomish County Jail. He is being held in jail without bail. A no-contact order has been put in place for the families of the victims.

"At this time, we don't have any reason to believe someone else was involved," Travis said. "We're not actively looking for anybody else.”

Hours after the shooting, friends of the victims tied purple ribbons to four trees that line Chennault Beach Road in honor of Bui, Long, Ebner and Kramer. Later, purple tulips were added to the memorial. Purple is one of Kamiak's school colors.

Hundreds of former and current Kamiak students attended a candlelight vigil at the school on Saturday evening in remembrance of the three who were killed.

“Anna was a role model for all of us,” said Lauren Carlos, a Kamiak senior, who became friends with Anna while in choir together. “She had such a vibrant spirit that will definitely live on. I’ll always remember her smile and positive attitude. She just radiated happiness and joy.”

A circle of mourners formed in the school parking lot. Friends of the victims shared tears and hugs, while lighting candles and bearing flowers.

Messages to the victims were written in chalk on the pavement, including these: "May you find peace, "All of you are in our hearts," "May God be with you,” ”Stop the hate. Spread the love. May they RIP.”

Another vigil for the victims was held Sunday evening at Mukilteo's Church of Jesus Christ of Latter-day Saints.

“Jake was an amazing person,” said Jansen Garside, a Kamiak grad who was best friends with Long since fourth grade. “He was somebody I looked up to. I wanted him to be my best man. I say he was my best friend, but he had so many best friends because he was such a great person. We had good times together.”

The community added flowers, candles and balloons to the memorial at Kamiak, pinned notes to the victims on a fence at the church, and signed a poster to give to Kramer in the hospital. More tears, hugs and prayers were shared, along with the message for Mukilteo to stay strong.

“Jordan was good at everything,” said Josh T., a Kamiak grad who worked with Ebner at Karmichael’s. “He did whatever people needed him to do. Even on the hardest days, he never complained. He always worked harder than anybody else.”

The flags at City Hall and the Mukilteo Library were lowered to half staff in recognition of the tragedy.

The mayor issued a proclamation on Monday for the community to wear purple in honor of the four victims.

“Let us all show them our love for each other by simply asking, ‘How are you doing?’ when we see someone wearing the colors,” Gregerson said. “Together, we are all Kamiak Knights.”

All of those involved in the shooting  the victims and the accused  graduated from Kamiak in 2015.

At Kamiak, Bui was involved in choir, singing in the all girls Starry Knights barbershop group. She also acted in the school’s spring musicals, including “Little Shop of Horrors” her senior year. Bui was a student at the University of Washington.

Long played baseball, basketball and football for Kamiak. He earned an all-Wesco honorable mention in baseball his senior year. He was the team’s starting catcher. He was attending Washington State University.

Ebner, who also loved baseball, was a serious student with a sense of humor while at Kamiak. He was interested in pursuing a career in aerospace. He was enrolled at Everett Community College.

Ivanov is a student at the University of Washington. He is a good student, having recently made the university's dean's list.

While police haven't yet shared a motive for the shooting, friends of the deceased said that he and Bui recently ended their relationship.

Ivanov had posted on Twitter two days before the shooting: “First and last tweet. I’ve been through it all.”

That tweet was followed by: “What’s Ruger gonna think?” The reference to "Ruger" may refer to Ruger Firearms.

On Instagram, Ivanov had also posted a photo of a rifle and three bullets earlier that week.

A year before he graduated, Ivanov started his own laser tag company. The game, known as Skirmos, lets players “imagine your favorite first-person video game in real life." Ivanov is listed as a founder of the company and a software engineer for the game on his LinkedIn profile.

Snohomish County Executive Dave Somers, Sheriff Ty Trenary and County Councilman Brian Sullivan issued the following statement after the shooting: “We are stunned and saddened by the shooting in Mukilteo that left so many families devastated and our community shaken to its core. Our thoughts and prayers are with everyone affected.”

Washington State Patrol and the Snohomish County Sheriff's Office are assisting the Mukilteo Police Department with the investigation. 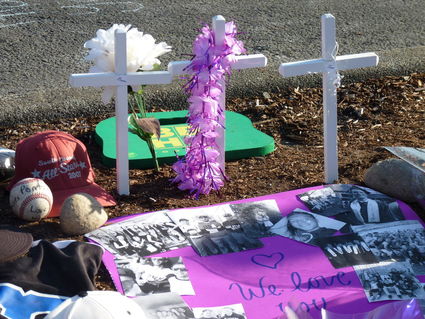 Three crosses at a memorial set up in a Kamiak High School parking lot represent the lives lost in the Mukilteo shooting: Anna Bui, Jake Long and Jordan Ebner.

Anyone with information regarding the shooting is asked to call the non-emergency number 425-775-3000.

For all those who are hurting, grief counselors will be available from 9 a.m. to 3 p.m. Monday-Wednesday and from 8 a.m. to 2 p.m. Thursday-Friday at Rosehill Community Center, 304 Lincoln Ave. in Mukilteo.