The biggest sports event ever 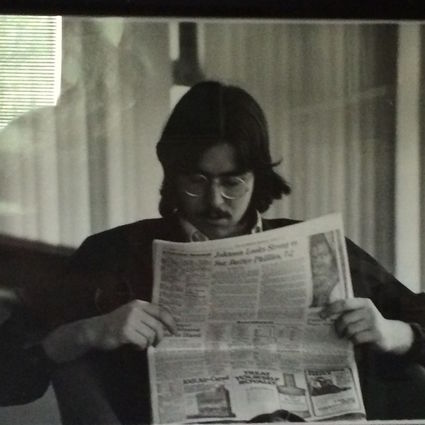 Reading about "The Greatest."

The weathered old photo above was taken back in March of 1971, when I was but a mere lad going to school at the late great George Williams College in Downers Grove, Illinois.

The photo itself is unremarkable on many levels, merely depicting another day in the life of me with my nose buried in a local sports page.

(My first recollection of reading the sports section would have been in 1957 when, at the age of 7, I asked, “Daddy, what does S-P-A-H-N spell?” during the World Series. It seems the first girl I ever kissed, Delette Ziggleman, had an Uncle Del from our home town who was the Milwaukee Braves catcher, and I must have wanted to keep up on the important current events of the day.)

The memory that does come flooding back, though, is of the time itself. March 1971. For it was in that month when the single biggest sporting event of my lifetime was played out, one that has yet to have seen its match, nor is it likely to.

It was on March 8, 1971, that the first Ali-Frazier fight was held, in Madison Square Garden. It brought together two undefeated champions.

Up to that time, the only 'defeat' Ali had suffered was in 1967 when the ruling boxing commissions stripped him of his title for failing to serve in the armed forces when he was called to duty. “I ain't got no quarrel with them Vietcong” the champ famously said, citing his Conscientious Objector beliefs as a justified reason for sitting out the increasingly unpopular Vietnam War.

With a felony conviction to his name and stripped of both his title and his license to fight, Ali was dormant for three years until October 1970 when, with his case under appeal to the U. S. Supreme Court, he was able to mount his boxing comeback. (The Supreme Court overturned his conviction in June of 1971.)

With the heavyweight crown having been vacated in Ali's exile, a tournament of sorts was arranged by the boxing powers, and Smokin' Joe Frazier emerged from the morass as the new/other undefeated champion.

After Ali won a pair of tune-up bouts in late 1970, The Fight Of The Century was scheduled for March 8.

The hype leading up to the fight was unprecedented for its day.

This was back before there was the March Madness that we know today; before there was an ESPN, CNN, or cable TV for that matter. The only way news was conveyed over the air was on the national and local news. And with that year's Super Bowl still in its infancy and well in our collective rear-view mirrors, and Opening Day of the baseball season still a month away, Ali-Frazier had our full, complete, and undivided attention.

From a pure boxing point of view, it was a fight fan's delight. Two contrasting styles; the tall and graceful Ali with his lightning fast hands that matched his feet, and his remarkable ability to evade punches against the short and squatty-bodied Joe Frazier, forever relentless in his attack, willing and happy to let you hit him twice, three, four times for each blow he'd deliver.

As a crystallizing social event, this fight was in a class by itself. Those of us from a younger generation had taken Ali to our heart as a man who had the courage to stand up for his moral convictions, consequences be damned, while Frazier was depicted by Ali as an 'Uncle Tom', with all the demeaning racial overtones that term carried in its day.

The promoters smelled a giant payday, and they made the most of it.

There were only two ways to see the fight live  either in person at MSG, or at various auditoriums, halls, and theaters around the country, where the fight was being shown on what was called closed-circuit TV. Steep admission prices were charged. To further boost their live gate, promoters restricted the use of ringside blow-by-blow announcers, allowing only a post-round analysis given in narrative form. For months afterwards, highlights of the fight could only be seen at selected theaters during intermissions of what used to be called 'double-features.' It was only after the cow had been almost completely milked dry that the fight appeared (amidst much pomp) on free TV, with Howard Cosell narrating on Wide World of Sports.

We college students huddled around the radio in our dorms, awaiting one man's opinion of what happened and who might have won each round, a scene that was duplicated throughout living rooms, bars, cars, and other dorms around the country.

The fight seemed pretty even going into the 15th and final round.

When the final round was described, shock turned to horror when we heard first that our hero Ali had not only been knocked down (!!), but that Frazier had won the match.

Stunned disbelief was on the faces of my dorm mates as we all emerged from our rooms to try to sort out what had just happened, and to find out if they had just heard what we had heard.

I remember going to class the next morning, walking outside, thinking it odd that the sun still managed to come up that morning after.

It wasn't until we saw the photographs of Ali on his back, his tassels dangling from his shoes, that it truly sank in with me that he had, indeed, lost.

Yes, there were rematches between the two, both of which Ali won. A second fight 2½ years later in MSG paled in comparison to the original, as Frazier had lost his title to George Foreman. Their third fight, the 1975 epic Thrilla In Manila, damn near killed them both. Smokin’ Joe couldn't get off his stool to face the 15th round. Legend has it that Ali would have done the same if Frazier hadn't beaten him to it.

But no match, not the Thrilla in Manila, nor any ballgame or sporting event since, matched the hype, the build-up, that we saw in March of 1971 with the first Ali-Frazier fight.

There's no question about it.