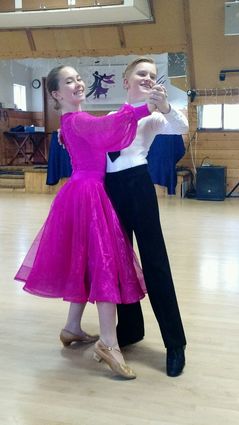 Lyubov Morgan, of Mukilteo, and her partner, Gabriel White, of Darrington, both 11, will compete on the U.S. juvenile team at the international Blackpool Junior Dance Festival in England this April.

A Mukilteo Elementary fifth grader will represent the United States at the international Blackpool Junior Dance Festival in England this April.

Lyubov Morgan, of Mukilteo, and her partner, Gabriel White, of Darrington, both 11, will compete on the U.S. juvenile team from April 6-12 in the Latin and ballroom match  dancing the waltz, tango, quickstep and more  against the world.

Lyubov and Gabriel were selected to join the U.S. team as a ballroom couple after placing third in the National Amateur Dancesport Championships March 13 in Utah.

Their achievement is as remarkable as it is rare: They have only been dancing together for one year, yet they are one of two ballroom couples dancing at championship levels on the U.S. team.

“This is one of our extraordinary couples,” dance coach Ekaterina Zakharoff said. “They have huge potential. I’m not the only one who sees their potential  all of the judges see it, too.”

The couple rehearses three times a week at the Hayloft Dance Hall in Lynnwood with mother and daughter co-coaches Elena and Ekaterina Zakharoff. Elena specializes in ballroom, while Ekatrina specializes in Latin.

The Zakaharoffs have had couples make the U.S. team at the Blackpool festival before  one even placed seventh in the world  but no one like Lyubov and Gabriel.

“They work very, very well together,” Ekaterina Zakharoff said. “They both understand that their result at competitions depends on how well they do at practices.

Lyubov is a fifth grader at Mukilteo Elementary. She danced for two years without a partner until she found Gabriel. She wants to be a professional dancer when she grows up.

“It’s great exercise for your body, and it’s really fun, and it’s great to win,” Lyubov said, adding that she also likes the costumes.

Gabriel still laughs about how they happened to audition for partners.

“Lyubov’s mom called my mom and asked if I’d like to audition, but the funny thing is, I didn’t know about it until the day it was happening,” he said. “My mom didn’t exactly tell me.”

It was clear at the audition that they were a perfect fit.

Gabriel is a sixth grader at Darrington Middle School. He’s been dancing for just one year. His goal right now is to place at Blackpool, but after that he’d also like to become a professional dancer.

“I like that it keeps you fit and that it’s never boring for me,” Gabriel said. “You’re always learning new things.”

He tagged along to his brother’s dance lessons until the instructor insisted, since he was there, that Gabriel try learning a step or two. He fell in love with dancing almost immediately. He even quit soccer for it.

In addition to the dance competition in Utah, Lyubov and Gabriel have also placed well in the competitions in California, Portland, Seattle and Ohio  but perhaps none will be more enjoyable than competing on the U.S. team in the Blackpool festival.

“It feels great because we’ve earned our spot in there,” Lyubov said, “and we’ve been doing really good.”

“I think it’s very amazing that we were selected for it, because there’s only four couples that are selected, and for ballroom there’s only two, so it makes it a very big accomplishment,” he said.

They know how to do the waltz, tango, foxtrot, Viennese waltz and quickstep  which are ballroom dances  and the samba, cha-cha, rumba, pasodoble and jive  which are Latin.

Zakharoff said that, at this rate, the 11-year-olds could be one of the world’s future great dance couples  not unlike five-time world Latin dance champions Yulia Zagoruychenko and Riccardo Cocchi.

“This puts them on a very good track,” she said. “For Gabriel and Lyubov, who have only been dancing for a year, to make the team for showing such good results at nationals, is huge. It’s a very good accomplishment.”