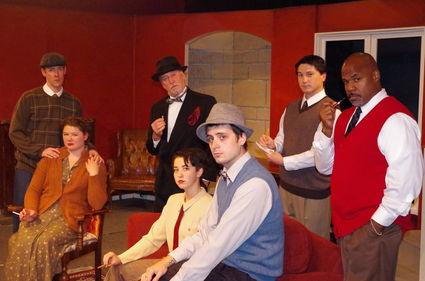 Murder mysteries don’t get any better than “The Mousetrap” by Agatha Christie.

When she sold the rights to turn her book into a play, she said she wouldn’t allow it to go to the big screen until it left the big stage. Sixty years later, there’s still no movie.

The story begins as they all must  in an English countryside house, far from others. There is, of course, a storm outside. Or rather, a blizzard.

A news bulletin comes on the radio saying that there has been a murder in London, and that the suspect seen fleeing the scene wore an overcoat, felt hat and a white scarf.

The owner of the house wears just those items  but so do most of his house guests.

Giles and Mollie have recently turned their lavish home into an inn. Their five guests include a spinster, an architect, a retired Army major, a young tomboy and an Italian man with car troubles.

The guests are joined by a cop named Trotter who has traced the suspect’s whereabouts to the house. He also has reason to believe that the murderer is there to settle a personal score.

The murder victim was involved in a case that cost a child’s life. Two of the guests were also involved. But who is the suspect? And who are the intended victims? No one knows or at least refuses to talk.

The case in question left many injured so, theoretically, the murderer could be a man or woman of any age.

Agatha Christie enjoys toying with the audiences’ expectations  and so does the Curtain Call Theatre Northwest cast.

At the center of it all is Mollie Ralston, played by Kelsey Jacobs in a great performance. She is a voice of reason as well as compassion. But how much does she know?

Tyler Stout plays her enigmatic husband, Giles. There are reasons to suspect him, but what about Mollie’s belief in her husband’s heart?

The detective in hot pursuit of his prey is played by Jason Conner. He shows us a very three dimensional character who seems to want an admission of guilt at all costs.

The childlike Christopher Wren is wonderfully portrayed by Ryan Asbert. He’s a new face in the crowd and suggests that there is something just a little “off” about him.

Samantha Lee is quite intriguing as the tomboyish Miss Casewell. Her character says little, but knows more than she volunteers. Is she a murderer or possible victim?

Mr. Paravicini is outrageously played by John Klise. He has a rather cruel sense of humor, but are his jokes to be dismissed  or taken as warning signs?

Rochelle Wyatt plays the fussbudget and boil on everyone’s back, appropriately named Mrs. Boyle. She’s a formidable presence, but can she hold her own against a hostile force?

And what of her patient traveling companion Major Metcalf? He seems to be a disinterested bystander, but is that just his cover? He’s played by Troy Johnson.

In order to find out who gets caught in the trap, you must see the spine-chilling “mousetrap” for yourself.