‘Done to Death’ a parody of murder mysteries | Theater Review 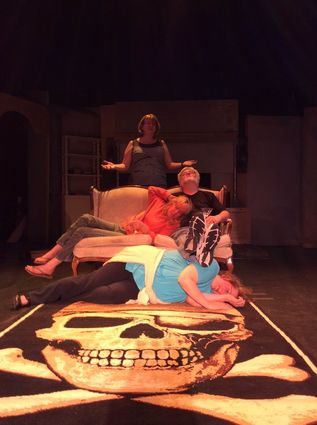 Do you have a taste for murder mysteries? But are you of the opinion that every variation has been explored? That all twists and clichés have been ‘done to death’?

Then maybe you should go see the Historic Everett Theater’s appropriately titled “Done to Death.”

Five mystery writers have gathered to collaborate on a new TV series. Jacqui Summers hopes that together they can come up with something that hasn’t been done before. Something the audience won’t see coming.

The problem is that, although all of them are mystery authors, their styles clash completely.

The husband and wife team Jessica and Whitney focus on hardboiled detective stories. Brad Benedict takes his concepts from “007” and “Get Smart.”

Rodney Duckton is in to the classic gothic horror that Lon Chaney was famous for. And Mildred Maxwell is very much into the very creative ‘how in the heck could he have pulled it off’ thing that Holmes and Monk specialized in.

But if that weren’t enough, just wait. We get to see their creative minds work in scenarios that they cook up. And what happens when they have a real murder to solve?

In a way, this show is like the “Scream” franchise, in that they try to solve the murders according to the ‘horror movie rules.’ Anyone who’s seen that, knows the way this works.

They are a part of it and outside of it at the same time. And one never knows what is supposed to be thought of as real or fantasy. “Done to Death” is filled with twists and clichés  but they’re not pretending they aren’t. They’re in on the joke.

This is the first play the Historic has done in a while. The theater is in good hands with the Outcast Players Theater Group. In fact, the new owners of the theater are a part of it.

Playing the married writer team Jessica and Whit are real-life couple Curt and Laura Shriner. They have tremendous fun with their scenarios and their boozy innocence. Curt was last seen in the Historic’s production of “The Odd Couple.”

Iris Lilly plays the bubbly Mildred Maxwell. She seems to work the hardest at discovering who the murderer is, but will she live long enough to do so?

T.J. Burninsky plays Brad Benedict. You may recognize him from the Northwest Savoyards past productions. All he needs is the “Mission Impossible” music, and he’s set.

The role of the pensive Rodney Duckton goes to Scott Freshman. He’s the one with the most melodrama, but he plays it with such finesse that he makes it seem plausible.

Laurie MacFarland Miller plays the anxious Jacqui Summers. This collaboration is her brainchild and, as such, she’s the one we feel the worst for when things go wrong. A real murder certainly wasn’t her plan.