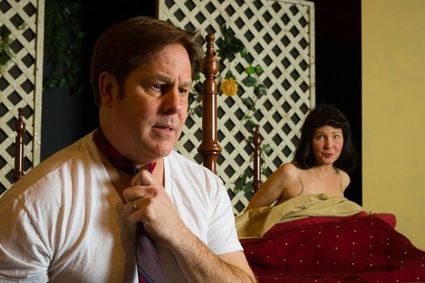 Infidelity is messy, but it seems to work itself out in movies and plays.

“Same Time, Next Year” by Canadian playwright Bernard Slade is a romantic comedy about a man and a woman who have an affair and agree to meet once a year for more than two decades.

Curtain Call Theatre Northwest tries its hand at telling this funny story of commitment and infidelity, which opens Jan. 17 at the Everett Music Hall.

The story begins in 1951. We meet an accountant named George who goes on vacation alone to see a friend in a California town. While staying at an inn, he meets a housewife named Doris. They hit it off immediately and fall completely in love.

Why wouldn’t they, with so much in common? They both come to this town at the same time every year. They’re both married. They both have three children each.

They both have spouses whom they love, but who don’t fulfill all their needs.

So George and Doris make the decision to meet once a year at this inn, and to leave each other alone the rest of the time.

We follow this decision for the next 24 years, as they fall more in love, change and make peace with their lives.

The play shows them meeting up again about every five years or so, from 1951 to 1975. So what do they do, besides the obvious?

One year, one of them looses a child. Another year, Doris shows up very pregnant. They also go through marital problems throughout the years. If one their marriages end, does the other jump ship?

Curtain Call Theatre Northwest used to be based in Bothell, but has relocated to Everett.

The insecure George is played by Jonathan Reis. He plays the many stages of life wonderfully and makes us feel for him as he tries to love two women and worries about his kids’ futures.

The part of Doris goes to Rochelle Wyatt. If anything, her part is more difficult because it involves more transition. She goes from stay-at-home mom to college student to business woman with relative ease.

The play is directed by Dave Morrison. The stage hands are John Hartquist and Davine Sholdez.

Slade’s “Same Time, Next Year” is a warm and challenging play that most will enjoy.

It is playing at the Everett Music Hall located near Macy’s inside the Everett Mall. For ticket information, call 1-800-838-3006.