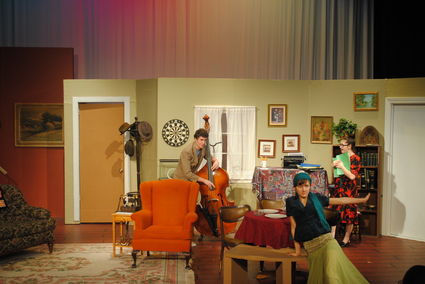 The 1936 play “You Can’t Take It with You” has been revived several times on Broadway and was the basis for the 1938 Academy Award-winning film directed by Frank Capra.

The play ponders many of life’s questions, including how to earn a living without forgetting to live.

The story is centered around an extremely strange family. They are not only weird, but manage to attract even crazier characters.

There’s Penny Sycamore who pens lurid romance plays and her husband, Paul, who, with his assistant, Ms. De Pinna, invents fireworks in the basement.

Then there’s Penny’s father, Martin Vanderhof, who’s under investigation by the IRS because he doesn’t believe in it.

Penny and Paul’s daughter Essie makes her own candy and dances ballet terribly, despite years of lessons. And, then there’s Essie’s husband, Ed, who fits right in to the clan.

The only normal one in the family is Alice Sycamore. She’s Paul and Penny’s other daughter. She loves her family, but wants their eccentricities eclipsed around her fiancé Tony Kirby.

She’s even more apprehensive about her parents meeting his.Especially since his father is her employer.

Add some even stranger guests to the dinner meeting, and she has a recipe for disaster.

Mariner has put together two different casts to perform this show on different nights.

The fearful yet level-headed Alice is played by Jessika Boothby and Stephanie Libed.

The eccentric grandfather, Martin Vanderhof is played by Garrett Heining and Ashton Greso.

The role of the very reliable fiancé Tony Kirby is played in both casts by Zach Salter.

Anastasia Robinson and Caylie Parker play Penny, the artistic mother. The explosive part of Paul, the father, is inhabited by Rhian Juarez and David Salzer.

Tony’s uptight father, Mr. Kirby, is played in both casts by Shaun Hamilton and Nick Moskaluk.

If you like “My Big Fat Greek Wedding” or “The Happiest Millionaire,” you’ll love this play.

Admission is $7 for adults, $5 for students and $3 for senior citizens and children under 14. Tickets are sold at the door.