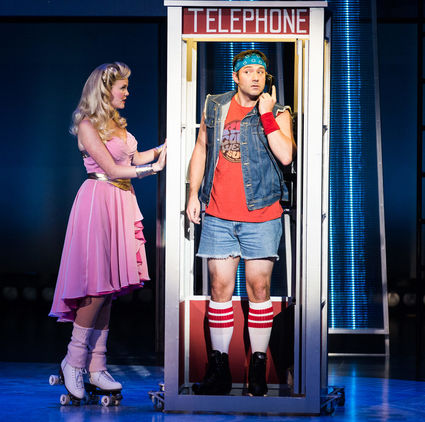 There are some plays that defy description. “Cats,” and “The Rocky Horror Show,” are two of them. “Xanadu” is definitely a third one.

All of these plays are quite bizarre. They’re amusing and fun, but if you’re looking for deep meaning, you’ll need to look elsewhere.

The story opens in 1980. An artist named Sonny Malone has just drawn a great chalk mural of some ancient muses. After he leaves, the muses emerge from the stone wall.

We then learn the rules of being a muse. They are allowed to inspire mere mortals, but can’t create anything. They are not to tell anyone who they really are. And they may not fall in love with anyone.

If any of the above should happen, the muse who commits this crime will be sent to a netherworld.

So what are they doing here? To inspire, of course!

Clio is the lead muse who takes it upon herself to inspire Sonny. And what does this shallow, but well-meaning young man dream of? One of the last forms of art from the 1980s  roller disco!

Together, Clio and Sonny find an abandoned theater where rock concerts and roller disco could be held. They go to the owner, a conglomerate named Danny.

He doesn’t have any interest in Sonny’s dreams. Especially since he lost interest in his own dreams long ago  those dreams were inspired by Clio, but Clio deserted him.

But the sight of Sonny mysterious companion makes him think perhaps it’s time to believe in something again, even if he doesn’t like Sonny’s plans.

There is a problem, however. One of Clio’s sisters is extremely jealous of her. She is determined to sabotage Clio’s efforts and get her executed.

Will Melpomene and her assistant Calliope succeed? And is creativity and falling in love all worth the risk?

The songs in “Xanadu” are lively and fun. Anyone who was around during the 1980s will recognize Olivia Newton-John’s “Magic.”

The Village Theatre has rolled in a good cast. The part of the Grecian muse Clio goes to Jessica Skerritt. She’s been in a number of the Village Theatre’s production, usually in a supporting part. Here, she shines in the lead.

Dane Stokinger plays the sweet lug Sonny. He too is familiar face to this stage. Here, he and Skerritt have to do a lot of difficult tricks on roller skates.

As the misanthropic Melpomene is Lisa Estridge. She is a hilarious villainess, complete with an evil cackle.

Christine Riippi plays her partner-in-crime Calliope. She resembles a hyped-up Wilma from “The Flintstones.” Here she makes her Village Theatre debut.

The rich, but lonely Danny is played by Jeff Steitzer. They are lucky to have him there. In the past, he’s been on Broadway.

If you’re in need of a good laugh, then “Xanadu” will do.