‘The Hollow’ is a good scare 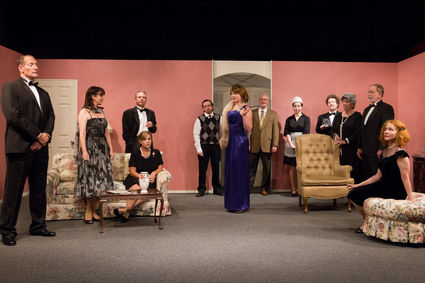 October is almost here, and with it comes spooky theater. Agatha Christie is a favorite for the stage this time of year.

Curtain Call Theatre is performing Agatha Christie’s “The Hollow,” which opens Sept. 27 at the Everett Music Hall in the Everett Mall.

The story begins, the way most of her work does, in a British home with something afoot. Sir Henry Angkatell is hosting a little family reunion for the weekend. Among the guests are John and Gerda Cristow.

John, although married to Gerta, has never let his vows stand in the way of his love life.

One of his girlfriends named Henrietta, is Henry’s daughter. Another just happens to be a neighbor of Henry’s.

It’s quite unfortunate that target practice is the chosen activity of the day. Everybody has a gun, and most everybody hates John. He is shot.

So who killed him? Was it one of his mistresses? Or his sweet, adoring wife? Or perhaps someone who wanted one of his girlfriends for himself? There is no shortage of suspects, weapons or motives.

Like all of Agatha Christie’s work, the material will keep you guessing until the end.

The theater company Curtain Call Theatre pulls off Christie’s work nicely. The group was founded in 1996.

Curtain Call has gathered a number of talented actors for this production.

Bruce Erickson plays the lascivious Dr. John Cristow. He’s on stage long enough to make a bad impression on the audience, which is as much as one could hope for in this play.

His current mistress Henrietta is played by Rochell Wyatt. She is no stranger to Agatha Christie’s work.

Jenny Price is vulnerable and pitiful as John’s wife Gerda. Of everyone, she seems the least likely suspect, completely blind to her husband’s infidelity and condescension.

The former girlfriend Veronica is played by Kelsey Jacobs. She is a manipulative shrew with no qualms about wrecking many lives to fulfill her desires. Her possible guilt is the most obvious.

Greg Lucas plays Inspector Colquhoun, the officer assigned to the murder case. He sees everything, and suspects everything we do. Whether he sees more than we do is the question.

His partner, the quiet and concerned, Det. Sgt. Penny is played by John Chapman. He’s a good sounding board for the audience.

Lucy Oaks plays the absent-minded and good humored Lady Angkatell, who is the lady of the household. Henrietta is her daughter.

Henrietta’s father, Henry, is played Mike Rorvick. He too has a history with Agatha Christie’s productions.

BriAnne Bailes-Green plays Midge, who seems to be one of the few women who isn’t involved with John somehow.

The part of John’s rival, Edward, goes to Jeff Christianson. He too has been in a few of Agatha Christie’s plays.

Samantha Lee and J. Spyder Isaacson play the supposedly loyal servants, Doris and Gudgeon. Could the maid and/or butler have actually done it?

If you’re in need of a good scare, do come and visit “The Hollow.”