‘Spinoff’ is a clever heist 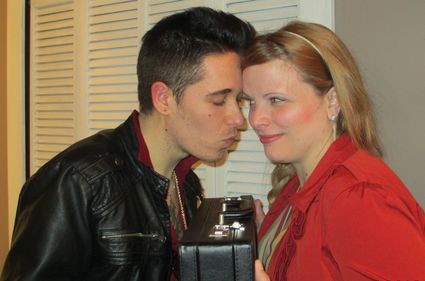 “Spinoff” is a comedy with a screw loose. This Reunion Theatre Group’s production will have you rolling on the floor as the illogic of the plots spins off into a whirling dervish.

Peter Colton is an absent-minded bank official. One afternoon, Peter comes home from work and his grown daughter Laurel, along with her boyfriend Carlos, immediately notice that he’s a bit protective of his briefcase.

Laurel soon discovers that the briefcase contains lots of money. It appears to Laurel that her sweet father has turned into a criminal overnight.

She decides to keep this discovery to herself, without even mentioning it to her father. Not long after that, Peter’s best friend Willy comes to their home to confess.

He “accidentally” stole the money. He tells Peter he thought that if he took the money out of the vault and immediately returned it, it would show their boss what a good man he was and therefore worthy of a promotion.

The only problem is that someone else picked up the briefcase  which is identical to Peter’s. Laurel has hidden the money, so locating it is problematic.

Spoiler alert: The audience then finds out that Willy along with his secretary Vicky Wickey did mean to steal the money. They also knowingly passed the briefcase into Peter’s hands in order to get it out on the bank without getting caught with it themselves.

There is also the complication of a witness that they need to keep quiet, while they figure out their next move.

The author Jack Sharkey and the actors of the Reunion Theatre Group keep you on your toes. In this cast, we have some new faces, as well as some familiar ones.

Jay Wesley Cochran is one of the new faces. He plays Peter Colton, the scatterbrained banker with a good heart. He’s a true blue friend who genuinely wants to do the right thing.

His rather deceitful best friend Willy is played by Anthony J. Morrow. He is the so-called mastermind behind it all, and although his scheme is clever, is falls apart quickly.

That would mostly be due to his choosing to keep the wrong company. His secretary Vicky doesn’t have the most IQ points. Her hilarious portrayal is given by Sarah Larson. She is a regular in the Reunion Theatre Group’s plays, and she proves her versatility once again.

Melissa Morrow plays the confused and scared Laural, Peter’s daughter. She isn’t sure what to do or think when she discovers that money, but she wants to be there for her father, whatever is coming.

Skyler Haines plays Laurel’s boyfriend Carlos. He’s quite mystified when he stumbles into this plot, but he makes to most out of calamitous circumstances. He gets to have a lot of fun here.

And last, but not least, in Reunion Theatre regular Janine Snavely as Sheila, a travel agent who knows too much.

Don’t miss this clever heist. If you need a good laugh, “Spinoff” is a good investment.