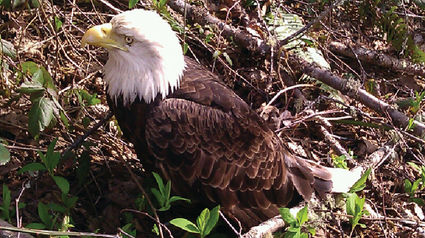 A bald eagle, found by a couple biking through Japanese Gulch, sits among the brush on April 2. The eagle died not long after this photo was taken, before rescuers from the Progressive Animal Welfare Society were able to help it.

An injured bald eagle found in Japanese Gulch last week died about an hour later of wounds it likely suffered during a territorial fight with another eagle, according to officials with a wildlife rescue center.

A couple spotted the eagle in the afternoon on April 2 while mountain biking on the Upper Gulch trail. The eagle was sitting in the brush, about 20 feet off of the train tracks that go through the park bordering Everett and Mukilteo.